An economically-sustainable hydrogen industry in Australia could soon be on the cards according to a blueprint released by CSIRO, the national science agency, which found that cost-competitiveness is firmly on the horizon. 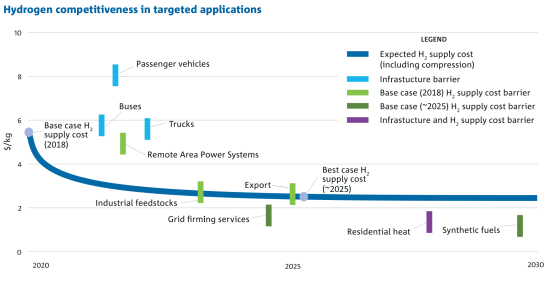 The National Hydrogen Roadmap sets out a path to develop the action and investment plans required to realise the full benefits of a hydrogen economy.

Hydrogen, a clean-burning fuel with a range of uses, from powering vehicles, to storing energy, can service multiple markets and if produced using low-emissions energy sources, will enable deep decarbonisation across the energy and industrial sectors. National Hydrogen Roadmap Roadmap findings include:

Australia has a unique and urgent opportunity to turn significant natural resources, including coal, gas, and renewables like solar and wind energy, into a low-emissions energy product and ship it around the world—in some cases literally exporting Aussie sunshine.

CSIRO is at the forefront of innovation with our partners in industry, government and the research sector, like our recently developed, world-first membrane to separate hydrogen from ammonia for fuel cell vehicles. [earlier post] This National Hydrogen Roadmap provides a blueprint for growing Australia’s hydrogen industry through coordinated investment to be globally competitive.

The national science agency consulted broadly to develop the Roadmap, which was sponsored by 21 industry and government bodies.

This is on the back of the Nikola order to build stations to power their fuel cell class 8 long range trucks from hydrogen renewably produced.

I would never have credited it initially, as I thought Nikola a ponzi designed to build on the Tesla fake business model, but they are wearing down my resistance.

Still a tall order, but they are no ponzi, having returned deposits which made no financial difference to them anyway, as they kept them in a separate account instead of spending them as development capital.

So CSIRO is predicting that the asymptotic cost will be about twice what it takes to make synthetic fuels.  No surprises there.

So what is the carbon cost of this hydrogen? They mention using coal and natural gas in addition to so-called clean energy which is not really clean as long as you are using power that would otherwise displace electric power produced burning coal or natural gas.

Why would the cost stop dropping after 2023?
More plausible it keeps dropping, blowing all fossil alternatives from the table.
Cheap (nobel metal free) electrolyzers and ever cheaper solar energy is around the corner.

sd stated: "...clean energy which is not really clean as long as you are using power that would otherwise displace electric power produced burning coal or natural gas."

Grid electricity fetches much better pricing for a given amount of energy than the equivalence in fuel energy, so no one is stupid enough to use Renewable Energy to make Hydrogen when that same RE can be fed to the electric grid to fetch much higher prices. Maximum profitability would dictate the use of Grid-EXCESS RE to make Hydrogen, while feeding as much RE into the grid as the grid can handle to maximize revenue.

The executive summary of the CSIRO report (your link) proposes thermochemical composition of Latrobe Valley brown coal (aka mud) as a preferred source of hydrogen, with CO2 sequestration, ie low quality source, expensive and unproven sink. It makes no mention of the Hazer process for decomposition of natural gas to hydrogen and graphite (www.hazergroup.com.au), developed by the University of West Australia. This process has been demonstrated in continuous flow mode and is moving to pilot plant scale, with the financial backing of a large mining company (Mineral Resources). The resultant high purity graphite has been successfully tested in lithium batteries. The hydrogen is a natural fit to ammonia production, and low carbon steel making. Not sure why the CSIRO has overlooked this promising and low cost technology, other than they didnt develop it, and it doesnt require carbon sequestration, a technology the CSIRO appears to favour.

Update to my previous post - having found the full report, the Hazer process is mentioned (p 68) as an emerging technology.

Interesting to note that a country (Australia) with hugh REs potential is funding R & D for the production of exportable H2.

According to a recent study, the installation of large wind farms and solar farms to generate more REs can increase rainfall in ultra dry desert areas and thereby reducing desert expansion and its drastic effects on agriculture and all living creatures.

An important potential project for California, New Mexico, Nevada and other States with not enough rain?

In 2018, Québec-Hydro will have to buy 11 TWh from local wind farms and simultaneously dump 11 TWh of excess water from their 27 large reservoirs. To make matter worst, the local Provincial Government (the sole owner of Q-H) is forcing Q-H to buy more unneeded energy from new wind farms to keep the local wind turbine industries going.