Infiniti unveiled its electric Prototype 10 at the 2018 Pebble Beach Concours d’Elegance. The concept represents a physical manifestation of Infiniti’s plans for electrified performance. From 2021, every new Infiniti model will be electrified, featuring hybrid or battery electric technology to enhance performance. 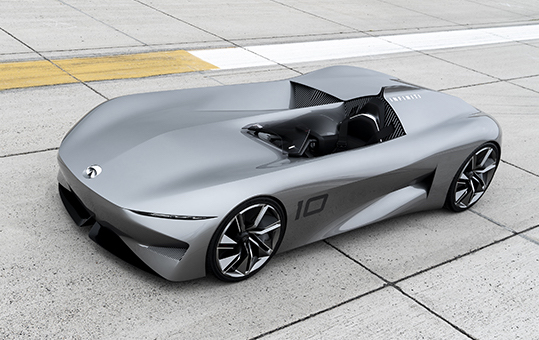 Following the ground-breaking Prototype 9 concept first revealed at the 2017 Pebble Beach Concours d’Elegance (earlier post), Infiniti has “looked back to go forward” with the Prototype 10. A future vision realized by Infiniti designers, Prototype 10 evokes the spirit of early Californian speedsters. This is the first project to come to fruition under the direction of Karim Habib, Infiniti’s new Executive Design Director, and it hints at how the brand’s design teams will evolve the appearance of its production cars.

The new concept is a natural evolution of the form language first seen in the Infiniti Q Inspiration and Prototype 9. The monoposto (single-seat) cockpit is consistent with Infiniti’s driver-focused approach, and is indicative of the new opportunities created for Infiniti by adopting electrified powertrains and flexible vehicle platforms. 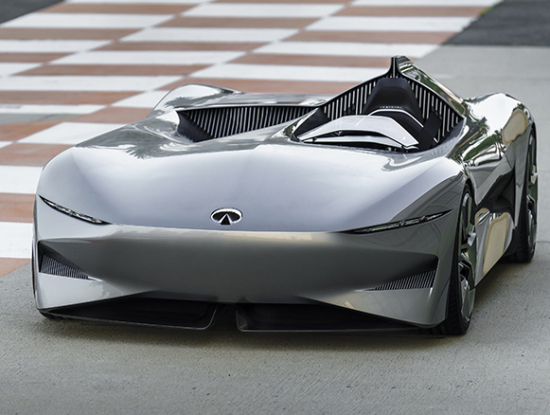 The new concept follows two other design studies revealed by Infiniti in the last 12 months: the Prototype 9 and the Infiniti Q Inspiration Concept (earlier post), unveiled at the 2018 North American International Auto Show in Detroit.

Where Prototype 9—a sleek, open-wheeled, electric retro-roadster—imagined an alternative history for Infiniti, the Prototype 10 is focused on what the future holds for the brand.

Prototype 10 provides a link between where Infiniti stands now, and where we are heading. For us, electrification means performance – our cars will be powerful, efficient, and highly rewarding to drive, and Prototype 10 is a physical representation of our electrified future.

Designed as a single-seat speedster, the Prototype 10 hints at the performance intent of all future electrified models from Infiniti. It doesn’t just embody the brand’s basic desire to electrify its cars, but represents a promise to deliver driving pleasure.

Like the Q Inspiration Concept, the new design study proposes how the function of an advanced, electrified powertrain could be communicated in a stunning new form. While it retains the clean, uninterrupted surfaces of the Q Inspiration Concept—an elongated, coupé-like sedan—the Prototype 10 telegraphs the performance benefits of electric powertrains with a more purposeful speedster configuration.

In seeking to understand the way Infiniti’s vehicles will look in future, every element of the Prototype 10’s design links to the notion of electrification. As with the Q Inspiration Concept, the concept’s clean, uninterrupted surfaces serve as a reference to the power source that provides an uninterrupted flow of electric propulsion.

The most obvious representation of the car’s performance is its low speedster layout and confident proportions, with its long hood and open cockpit contrasted by a dramatic fin behind the driver’s seat.

Prototype 10’s cockpit design is inspired by single-seat formula race cars—placing the driver fully in-control with an unhindered view of the road ahead, with ready access to ergonomic controls, and with minimal distraction. Communicating the notion of electrification and performance, Prototype 10’s uncluttered cockpit is fitted only with a driver’s seat, four-point harness, brake and accelerator pedals, and a striking, highly technical race-inspired steering wheel.

The layout of Prototype 10 suggests the approach that Infiniti will take in engineering its new cars. Infiniti’s EV and e-POWER hybrid powertrains offer greater packaging flexibility for Infiniti engineers, and afford new creative freedom in design.

Prototype 10 hints at the potential for Infiniti to adopt rigid, modular platforms with flat floors to underpin every one of its new electrified vehicles, and support a new era of design and packaging. Indeed, it’s due to the flat floor that the Prototype 10 driver’s seat can be situated so low in the chassis.

Modular platforms will enable Infiniti to apply e-POWER and battery EV powertrains in new and creative ways within chassis of all shapes and sizes—including sedans, SUVs and sports cars. Electrification also provides the opportunity to introduce a wider variety of drivetrains, including a new e-AWD system, underpinned by electric motor technology, to help transform perceptions of EV performance and power delivery.

Purely a design study at this stage, Prototype 10 nevertheless hints at the inherent flexibility of Infiniti’s approach to platform and powertrain development. The ducts and vents in Prototype 10’s body could enhance cooling for a battery pack, electric motor or even a downsized gasoline range-extender engine.