PM2.5 pollution shortens human lives by more than a year, according to a new open-access study from a team of environmental engineers and public health researchers published in the ACS journal Environmental Science & Technology Letters. Better air quality could lead to a significant extension of lifespans around the world.

This study marks the first time that data on PM2.5 and lifespan has been studied together in order to examine the global variations in how they affect overall life expectancy. 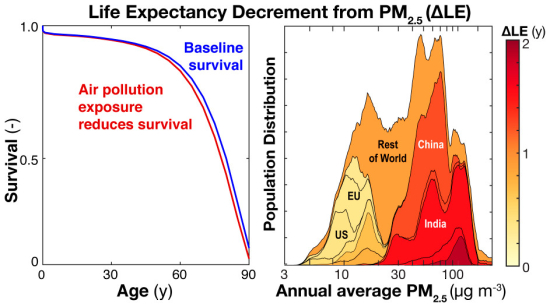 The researchers looked at outdoor air pollution from particulate matter (PM) smaller than 2.5 microns. These fine particles can enter deep into the lungs, and breathing PM2.5 is associated with increased risk of heart attacks, strokes, respiratory diseases and cancer. PM2.5 pollution comes from power plants, cars and trucks, fires, agriculture and industrial emissions.

Led by Joshua Apte in the Cockrell School of Engineering at The University of Texas at Austin, the team used data from the Global Burden of Disease Study to measure PM2.5 air pollution exposure and its consequences in 185 countries. They then quantified the national impact on life expectancy for each individual country as well as on a global scale.

The fact that fine particle air pollution is a major global killer is already well known. And we all care about how long we live. Here, we were able to systematically identify how air pollution also substantially shortens lives around the world. What we found is that air pollution has a very large effect on survival—on average about a year globally.

In the context of other significant phenomena negatively affecting human survival rates, Apte said this is a big number. 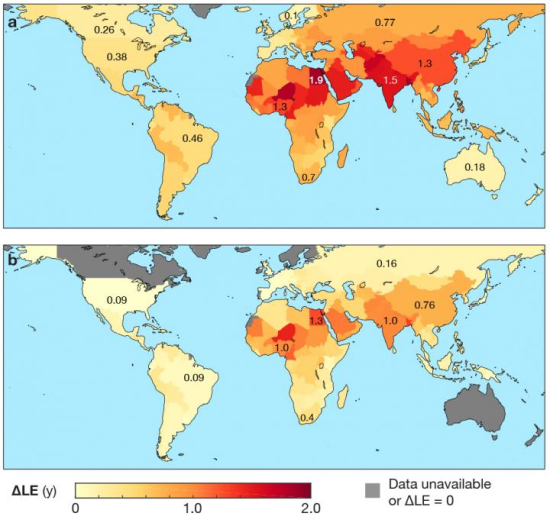 It’s considerably larger than the benefit in survival we might see if we found cures for both lung and breast cancer combined. In countries like India and China, the benefit for elderly people of improving air quality would be especially large. For much of Asia, if air pollution were removed as a risk for death, 60-year-olds would have a 15 percent to 20 percent higher chance of living to age 85 or older.

The study was funded through the Center for Air, Climate, and Energy Solutions, an interdisciplinary research collaboration supported by the US Environmental Protection Agency. Apte was joined in this study by colleagues from University of British Columbia, Imperial College London, Brigham Young University and the Health Effects Institute.

Another claim that (man-made) pollution, including PM 2.5, adversely affects our health and reduces our life span expectancy.

Exposition to pesticides in the air, in cereals, vegetables, grains, fruits and other food commonly consumed by humans, animals, birds and fishes may be doing even more damages?

Of course, responsible groups will continue to claim the opposite.

We should immediately remove all human-caused sources of PM2.5, which include of course the combustion of fossil fuels for energy production, degradation of tires, construction, disturbing soils by farming, dust stirred up on roads, by transport, and cooking.

Replace all that stuff with batteries., solar cells and wind farms.

But for f_cks sake no mining, ore refining, or chemical processes to make the batteries, solar cells or wind turbines. And whatever you do don't transport ay of that stuff!

I don't know what's so hard. Just freakin' provide energy, transport, food and shelter but don't make any dust, burn ANYTHING or move big things around.

That would definitely improve life expectancy. For the Children.

As the world population went up from a few millions to many billions, industries to feed , lodge , cloth, care, and transport all of us are using more and more (not so clean) energy.

The atmosphere is being saturated with all kind of chemicals and various man made pollution. The air we (and animals/plants) use to survive is dirtier in many places. Residents in many major cities have to wear masks during peak traffic periods. Plastics dumped in the rivers/oceans are killing fishes including whales.

When the world population reaches 10 billions, somewhere close to 2050/2080, pollution and GHGs will create warmer weather. Fresh water will have to be rationed in many places. Agriculture will produce less due to fresh water shortages. Food price will go up and a few more millions will starve.

As sea level goes up, low level shores and many islands will be flooded. forcing millions to move to higher lands. Half of Florida may be under water.

Only a very, very small fraction of PM2.5 does come from the tailpipe of vehicles. Tailpipe particles are far smaller than one micron (thus, they might have other health effects, but I will leave that topic for now...). The main contribution to PM2.5 and PM10 from traffic is from tyre/road contact. These PM emissions are roughly proportional to vehicle weight. If you replace ICEs with battery vehicles, you will increase PM2.5 and PM10 emissions. This is a very simple fact that gets neglected all the time.