Brazil’s Ambev Brewery will use 1,600 electric trucks from Volkswagen; electric version of the Delivery

Brazil-based Ambev Brewery, owner of brands such as Skol, Brahma, Antarctica and Guaraná, announced that by 2023, it will use 1,600 electric trucks made by Volkswagen Caminhões e Ônibus (VWCO) to transport beverages.

With the partnership, about 35% of the fleet serving the brewery will consist of clean energy-powered vehicles, no longer emitting more than 30.4K tons of carbon in its logistic chain per year. The deal is the VWCO’s largest for the cargo segment this year.

The first truck to be part of this fleet will be the VW e-Delivery—an electric version of the Delivery light truck—which will hit the streets later this year, opening the first test phase to determine the most appropriate technology for Ambev’s operations. The model will be 100% recharged with electric power from clean sources such as wind and solar. 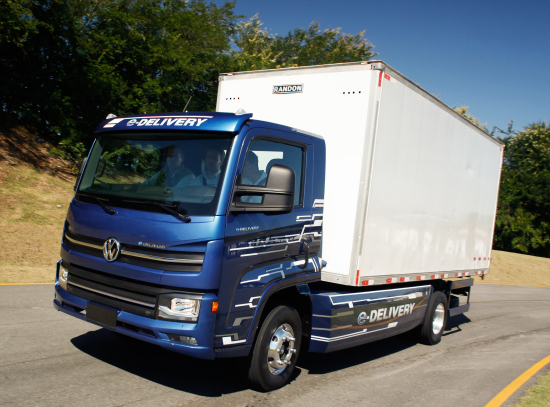 The prototype for the e-Delivery was developed in partnership with Eletra. It is equipped with the new WEG AL160 electric motor, which delivers 80 kW (109 hp) power, with maximum torque of 493 N·m and an Allison automatic transmission. It uses LiFePO4 lithium-ion battery packs.

The e-Delivery model offers two recharging options: the fast opportunity recharge, where it is possible to ensure 30% of the load in just 15 minutes, and can be carried out several times along the route of the vehicle to increase its autonomy; or slow recharge, which takes 3 hours for a full charge.

The e-Delivery also has a brake with three stages of regeneration, which can be adjusted according to the load condition or preference of the driver. The regenerative brake acts before the pneumatic brake, to decelerate the vehicle, recovering up to 30% of energy during braking and using it to recharge the batteries.

Auxiliary systems, such as air compressor, air conditioning, steering pump and water pump are in charge of independent electric motors to the traction, optimizing the traction capacity of the main engine. Shafts, suspension, chassis, wheels and tires follow the traditional characteristics and robustness of the new Delivery line, sharing common components with the platform.

The e-Delivery can reach a range of up to 200 kilometers (124 miles), depending on the application and configuration of the vehicle. The e-Delivery will be available on 9 and 11 ton models, as per customer’s requirement.

The partnership is a landmark in the history of both companies: it is the biggest announcement of this kind yet made. The teamwork represents an important step towards a less fossil fuel-dependent future, and aims at reducing even more greenhouse gases emissions by the fleet that attends Ambev Brewery. Between 2014 and 2017, the company has already reduced its index by 33.9%.

Volkswagen Caminhões e Ônibus’ global development center, headquartered in Brazil, investigated and applied the best solutions available in the world and locally to satisfy our customers’ needs in low emission vehicles for emerging countries. Thanks to our 20-year long partnership with Ambev, we have been the first to develop commercial vehicles for beverage distribution. And now, once more, we sprint off together to enter the electric era.

Manufacturer of the commercial vehicles Volkswagen and MAN, VW Caminhões e Ônibus is one of the biggest truck and bus makers in Latin America. VWCO will produce the VW e-Delivery along with its partners in the Modular Consortium, at the plant in Resende, Brazil.

VW Caminhões e Ônibus is also a pioneer in using biodiesel and in developing a truck with diesel-hydraulic hybrid system in Brazil.