ABS has confirmed the successful conversion of a slow-speed marine diesel engine to operate on ethane as a fuel. 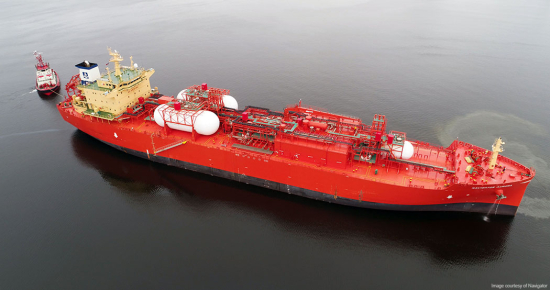 The capability to burn efficiently ethane boil-off gas as engine fuel significantly reduces the need of gas re-liquefaction during the voyage. This means that less power is needed for the cargo handling, thus providing a more efficient and environmentally sound overall system. (Earlier post.)

The 15-day long conversion followed engine performance and emissions testing at Kawasaki in Japan, to prove the principle that burning ethane in the Navigator ME-GI engines would be possible. The trials were successful and demonstrated that suitable power and emissions performance, meeting Classification and statutory requirements, was available at a fuel gas injection pressure of just over 300 bar.

This project represents a significant investment by both Navigator Gas and Borealis that clearly demonstrates a very strong commitment to environmental protection and the reduction of greenhouse gas emissions. This retrofit modification will comply with all current global emissions regulations and position us as early adopters of the global sulphur cap regulation due to come into force on the 1st of January 2020.

ABS is a leading global provider of classification and technical advisory services to the marine and offshore industries.

Great, if dirty diesel ships, trains, trucks and buses engines could be easily converted to cleaner gas using units, associated pollution and GHGs could be reduced?

Coupled with FCs, it coud do even better?

Boil off gas from LNG:
Evergas first off the mark with ethane carriers - LNG World Shipping
https://www.lngworldshipping.com/.../view,evergas-first-off-the-mark-with-ethane-car...
Aug 11, 2016 - The system's flexibility enables the use of both cargo tank vapours as natural boil-off gas (NBOG) and ethane from the deck fuel tanks as forced boil-off gas (FBOG) as required. ... It is up to Ineos whether they use LNG, ethane or conventional fuels in the ship propulsion systems during the course of the charter.

Ethane looks like an excellent fuel and not just for LPG carriers. At $.60/DGE it looks very economical and is much easier to handle than LNG.

Coupled with FCs, it could do even better?

First thought was why? The MAN B&W 6S50ME-C8.2-GI engine has 50% thermal efficiency and Low Speed Marine Diesel 2-stroke engines already reach 55% or could be higher as a hybrid.
However, a Carbonate Fuel Cell could capture up to 90% of the CO2 and remove any NOx pollutants (Check out Fuel Cell Energy). So yes FCs could turn shipping from one of the worst polluters to one of the cleanest!