Mitsubishi Motors’ 2019 Outlander PHEV, featuring a redesigned powertrain, is now on sale in Japan. The 2019 model, unveiled earlier this year at the Geneva show (earlier post), features a more advanced PHEV system that gives this SUV a stronger EV flavor.

Mitsubishi made improvements to 90% of the major components of the PHEV system. The 2019 PHEV features a newly developed drive battery and engine as well as increased rear motor and generator outputs. These improvements give further improvements in the smooth and powerful acceleration inherent to its electric motor drive, and in its quietness. In addition, the model adds new SNOW and SPORT modes to its Twin Motor 4WD powertrain.

Drive battery capacity has been increased from 12 kW/h to 13.8 kW/h. Rear motor and generator outputs have been increased by around 12% and 10 % respectively. These improvements extend Outlander PHEV’s all-electric cruising range to 65.0 km (40.4 miles), up from 60.2 to 60.8 km in the JC08 cycle. 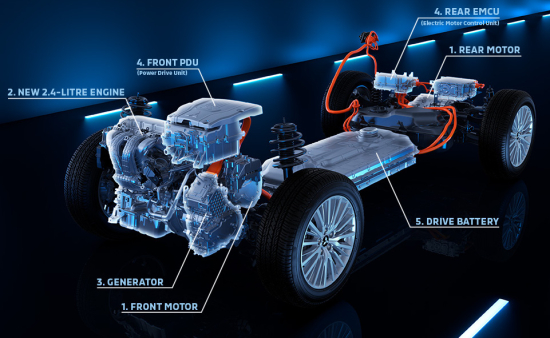 A 2.4-liter Atkinson engine replaces the old 2.0-liter unit; changes in cam profile and valve timing control allows high-efficiency power generation in the lower rev range. Also, the reduction in engine speed when in generating mode and optimization of generation output and, improvements to the air cleaner and main muffler, reduces noise from the engine itself. The result is further enhancement in the feel-good driving experience that the electric drive delivers even when the engine starts and while running. I wish these articles did a bit of synthesis like going into differences in price over the base model, instead of just repeating press releases.

I think users who don't think Mike puts enough effort into the site should ask for their money back.

Or alternatively do as I often do, and put some effort into research to find and post supplementary information themselves.