Small, light and electrically-powered vehicles will likely be core to city and regional commuter transport in future, alongside public transport. As part of the Next Generation Car (NGC) project, researchers from the German Aerospace Center (Deutsches Zentrum für Luft- und Raumfahrt; DLR) have developed an innovative concept for small vehicles: the Safe Light Regional Vehicle (SLRV).

With a range of around 400 kilometers (249 miles) based on compact electrical transmission powered by a fuel cell, the SLRV should serve primarily as a car for commuters and those travelling from A to B. For example, getting from the outskirts into the city center or travelling about in the area around the city—i.e., anywhere that local public transport does not offer comprehensive coverage.

With the SLRV, the focus is on building a very lightweight body in order to make driving as resource-efficient as possible. At the same time, we want to offer a very high degree of passive safety, which is often insufficient for existing vehicles in the lightweight vehicle segment.

The body of the two-seater SLRV is low and elongated in order to ensure as little aerodynamic resistance as possible. Weighing only around 80 kilograms (176 lbs), it is remarkably light, yet very safe and inexpensive to produce.

This is possible due to the sandwich construction method. The sandwich material used comprises a metal top layer and a plastic foam interior. The front and rear parts of the SLRV are made of sandwich panels and serve as crash zones. These sections also house much of the vehicle technology. The passenger space consists of a shell with an attached ring structure. This absorbs the forces that act on the car while driving and should protect the occupants in the event of a crash.

Structures made of sandwich materials have not been used in the series production of cars until now. There is a huge need for research to determine the behaviour of such structures and to find out how best to build them. The crucial thing is how sandwich structures behave when subjected to loads, right up to the extreme case of a crash.

—Michael Kriescher, the DLR researcher responsible for the SLRV project

Kriescher’s team has spent many hours on the computer constructing the body of the SLRV and simulating different load scenarios. With a view to testing their calculations, the scientists have also built two prototypes and tested them at DLR’s own crash-test facility at the Institute of Vehicle Concepts in Stuttgart. 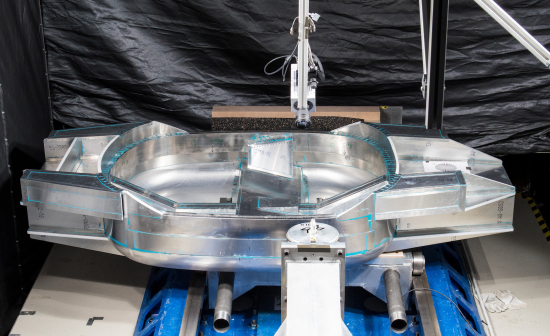 The SLRV body before crash testing.

We conducted a frontal and a pole crash similar to those performed by the car industry. The pole crash is particularly hard on any kind of car body, as it simulates the side impact of a car when it strikes a hard object, like a tree.

For this crash, the researchers screwed the SLRV body onto a fixed carriage. The obstacle, in this case a pole-like impactor, was mounted on a mobile carriage. Over a few meters, a catapult accelerated this carriage to a speed of almost 30 km/h and launched it into the car body. Several high-speed cameras recorded both experiments from different angles. Using measuring points that they had previously stuck to the body, the DLR researchers were then able to examine the movement and deformation at individual points with precision.

Both crash tests ran smoothly and gave us lots of interesting results, which we are now comparing with our simulations. This should allow us to further develop the body of the SLRV – step by step – and to improve it in a targeted way.

As their next milestone, the DLR scientists want to build a demonstration model in the form of a driveable research vehicle.

The Next Generation Car (NGC). Twenty DLR institutes are working together to develop technologies for next-generation road vehicles as part of the Next Generation Car (NGC) project. Alongside the SLRV, there are two other vehicle concepts that deal with the megatrend of urbanization: the Urban Modular Vehicle (UMV) is a modular city car for private and commercial users, while the Inter Urban Vehicle (IUV) is designed for longer distances between metropolitan areas.