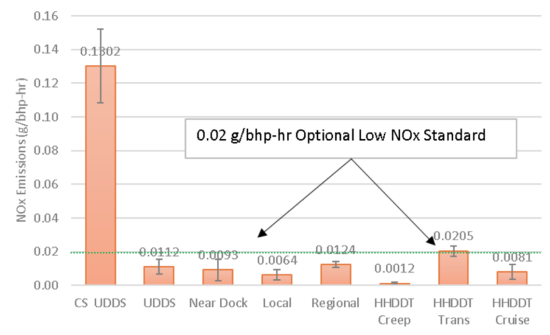 The results underscore the importance of the near-zero truck engines for cleaning the air. Most heavy-duty vehicles on roads today are diesel-powered and represent one of the largest sources of NOx emissions and fuel consumption in North America. By contrast, the new near-zero emissions 12-liter engine, made by Cummins Westport, is the only heavy-duty engine in the category to not only meet, but exceed, the California Air Resources Board’s cleanest optional low-NOx standard of 0.02 g/bhp-hr.

The ISX12N 400 NG engine met and exceeded the target NOx emissions of 0.02 g/bhp-hr and maintained those emissions during in-use duty cycles found in the South Coast Air Basin. The other gaseous and particulate matter were below the standards and/or similar to previous levels. Particle number, ammonia emissions, and methane emissions were higher than current 2010 certified diesel engines on similar drive cycles. These higher emissions should be considered for health and environmental impact studies. In general, it is expected NG vehicles could play a significant role in achieving the NOx inventory goals given the near zero emission factors demonstrated.

Testing was performed on a dynamometer that simulated various types of driving conditions, from pulling into a loading dock to regional hauling. Johnson performed similar testing on an 8.9-liter near-zero natural gas engine last year. Those results found the smaller engine had even lower emissions than California standards will require in the near future—in some driving conditions, almost zero.

The first study was a smaller engine intended for use in school buses and trash trucks, which are only about 30 percent of the heavy-duty inventory. The new engine is for drayage and movement of goods, or 70 percent of the inventory. This engine technology is good not only for the smaller work-force applications of transit and refuse, but also for hauling loads around Southern California.

Take the leap to all electric; Any fossil fuel you use was created by grossly polluting the land, air and water through mining, refining, reforming, flaring, fracking and spillage. Diesel is obsolete and dead-ended. Spend your money on the future, not the past.