US households are holding on to their vehicles longer

The 2017 National Household Travel Survey (NHTS) reported that the average vehicle—including cars, trucks, and vans—has increased from 9.3 years in 2009 to 10.5 years in 2017, suggesting that many households have delayed the purchase of a new vehicle and continuing a trend of US households operating vehicles longer. The slowing of vehicle turnover has implications for transportation fuel consumption, because newer vehicles tend to have better fuel economies. 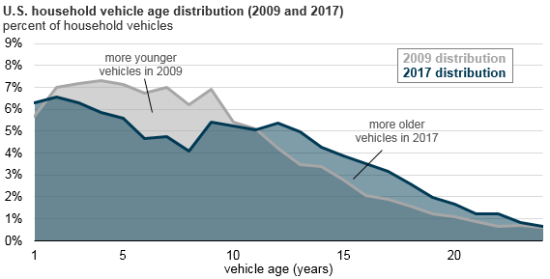 The aging of US household vehicles was reported across all light-duty vehicle types, in particular for pickup trucks, vans, and sport utility vehicles. By comparison, the average age of in-use cars increased, in absolute terms, from 9.5 years in 2009 to 10.3 years in 2017.

The increases in average age between 2009 and 2017 ranged from a low of 0.4 years for other light trucks to a high of 2.4 years for pickup trucks.

Overall, the aging of the vehicle fleet suggests many households have delayed purchasing a new vehicle or have instead purchased a used vehicle. Data from the Bureau of Labor Statistics’ Consumer Expenditures Survey show that spending on vehicle repair and maintenance has also increased in recent years.

Even as vehicle turnover has slowed, the US Environmental Protection Agency reports that fuel economy has continued to increase because of technology advances adopted across all vehicle types of new light-duty vehicles.

Average and aggregate energy use by vehicles, however, also is affected by travel demand and characteristic data not incorporated in vehicle-age statistics, such as variations among household vehicle ownership and use.

The NHTS has been conducted by the US Department of Transportation's Federal Highway Administration eight times since 1969. The 2009 survey was conducted before the federal Car Allowance Rebate System—which accelerated new vehicle purchases in July and August 2009—had started.

Not sure it's a long-term trend. Add 8 years to the bump in the 2009 data and you get a corresponding bump in 2017.
The years before the 2009 recession were characterized by easy credit, which fueled car sales. What the graph shows is that many of those cars are still on the road (and presumably paid-off!).
There's a dip in the 2017 chart (around 5-8 years) that corresponds to the 2009+ sales collapse. Makes perfect sense: there aren't as many 2009-2012 cars on the road, because fewer were made/sold in the first place.