In an open-access study published in the journal Science Advances, Lawrence Livermore National Laboratory (LLNL) researchers, along with their counterparts at Harvard University, report on the hierarchical 3D printing of nanoporous gold, a proof of concept that researchers say could revolutionize the design of chemical reactors.

Combining 3D printing through extrusion-based direct ink writing and an alloying and dealloying process, researchers were able to engineer the nanoporous gold into three distinct scales, from the microscale down to the nanoscale, reporting the hierarchical structure “dramatically improves mass transport and reaction rates for both liquid and gases.” 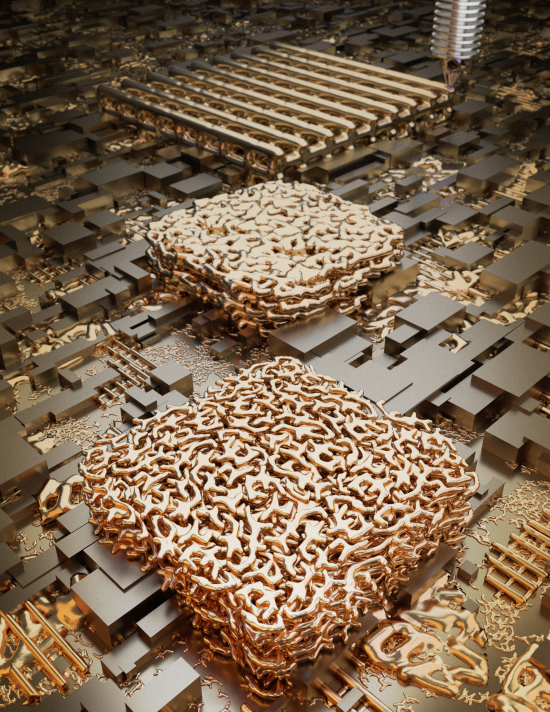 With the ability to manipulate the catalyst’s surface area to generate electrochemical reactions through 3D printing, researchers said the development could have a major impact on electrochemical plants, which today rely primarily on thermal energy.

By controlling the multiscale morphology and surface area of 3D porous materials, you can start to manipulate the mass transport properties of these materials. With hierarchal structures you have channels that can handle transfer of reactants and products for different reactions. It’s like transportation systems, where you go from seven-lane expressways down to multiple lane highways to thoroughfares and side streets, but instead of transporting vehicles we’re transporting molecules.

Achieving the finished product required several steps. LLNL researcher Cheng Zhu and former postdoc Wen Chen created inks made of gold and silver microparticles. After printing, the 3D parts were put into a furnace to allow the particles to coalesce into a gold-silver alloy. Then they put the parts into a chemical bath that removed the silver (a process called “dealloying”) to form porous gold within each beam or filament.

The final part is a 3D hierarchical gold architecture comprising the macroscale printed pores and the nanoscale pores that result from dealloying. Such hierarchical 3D architectures allow us to digitally control the morphology of the macropores, which allowed us to realize the desired rapid mass transport behavior.

—Wen Chen, currently a professor at the University of Massachusetts-Amherst

Zhu and Chen said the team’s method is a model that could easily extend to other alloy materials such as magnesium, nickel and copper, offering a powerful toolbox to fabricate complex 3D metal architectures with unprecedented functionalities in fields such as catalysis, batteries, supercapacitors and even carbon dioxide reduction.

Chen, who focused on printing and post-processing parts, said the key to the process was developing inks with well-suited flow behavior, allowing them to form continuous filaments under pressure and to solidify upon exiting the printer’s micro-nozzle to retain their filamentary shape.

The challenge in catalysis is in combining high surface area with rapid mass transport, according to LLNL researcher Juergen Biener, who develops new catalysts materials for IMASC, an Energy Frontier Research Center funded by the US Department of Energy.

While additive manufacturing is an ideal tool to create complex macroscale structures, it remains extremely difficult to directly introduce the nanostructures that provide the required high surface area. We overcame this challenge by developing a metallic ink-based approach that allowed us to introduce nanoporosity through a selective corrosion process called dealloying.

Biener said LLNL’s extrusion-based approach is universal and scalable, provides tooling-free control over the macroscopic sample shape, and—most importantly—enables integration of nanoporosity in an application-specific engineered macroporous network structure. The combined advantages open a new design space for chemical reactor and energy storage/conversion devices, he said, adding that the resulting materials can potentially revolutionize the design of chemical plants by changing the scaling relations between volume and surface area.

The project is a Laboratory Directed Research & Development feasibility study feeding into a proposed strategic initiative led by Duoss and LLNL researcher Sarah Baker to create 3D electrochemical reactors in which scientists could exert greater control over catalysts and reduce transport limitations.

Researchers said instead of large electrochemical plants, typically located close to oil refineries or in remote areas, modular reactor networks could be created in a series that could be easily replaceable and transportable for relocation near sources of abundant renewable energy or carbon dioxide.

Researchers said they are already starting to explore other materials that might be catalysts for other reactions. The LLNL team collaborated with Cynthia Friend, a professor of Chemistry and Chemical Biology at Harvard, through the Department of Energy’s Frontiers Research Center. Harvard scientists performed tests on samples of the parts, showing that their hierarchical structures facilitate mass transportation.