Mercedes-Benz has unveiled the first member of its EQ electric vehicle line-up: the new Mercedes-Benz EQC crossover SUV. The EQC marks the start of a new mobility era at Daimler.

Featuring two asynchronous electric motors at the front and rear axles with a combined output of 300 kW, an 80 kWh Li-ion battery pack and combined power consumption of 22.2 kWh/ 100km, the EQC delivers an electric range of more than 450 km according to the NEDC. Acceleration from 0 to 100 km/h takes 5.1 seconds, and the top speed is 180 km/h (112 mph). (Figures for power consumption are provisional and were determined by the German Technical Service corporation. The range figures are also provisional. EC type approval and conformity certification with official figures are not yet available. There may be differences between the stated figures and the official figures.) The EQC is classed as a crossover SUV. The extended roofline and window layout with a low waistline and the coupé-like roof recess at the rear visually position it between an SUV and an SUV coupé.

As the first Mercedes-Benz model to be launched under the new product and technology brand EQ, the EQC features an all-new drive system development with compact electric drivetrains at each axle. These give the EQC the driving characteristics of an all-wheel drive.

To reduce power consumption and increase dynamism, the electric drivetrains are configured differently: the front electric motor is optimized for best possible efficiency in the low- to medium-load range, while the rear one determines dynamism. Together, they generate the output of 300 kW and a maximum torque of 765 N·m (564 lb-ft). 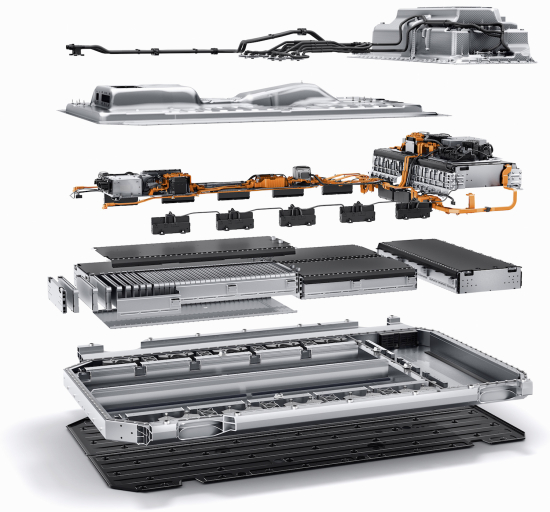 The EQC supports its driver with five driving programs, each with different characteristics: COMFORT, ECO, MAX RANGE, SPORT and an individually adaptable program. In the more economical driving modes, the haptic accelerator pedal that prompts the driver to conserve power plays an important role. The driver is also able to influence the recuperation level using so-called paddles behind the steering wheel.

The ECO Assist system gives the driver comprehensive support when driving predictively: by prompting the driver when it is appropriate to come off the accelerator, e.g. because the vehicle is approaching a speed limit, and by functions such as coasting and specific control of recuperation. For this purpose, navigation data, traffic sign recognition and information from the intelligent safety assistants (radar and stereo camera) are linked and processed.

The EQC is equipped with a water-cooled onboard charger (OBC) with a capacity of 7.4 kW, making it suitable for AC charging at home or at public charging stations.

Charging at a Mercedes-Benz Wallbox is up to three times faster than at a domestic power socket. It is faster still with DC charging—which is standard for the EQC—for example via CCS (Combined Charging Systems) in Europe and the USA, CHAdeMO in Japan or GB/T in China. Depending on the SoC (state of charge), the EQC can be charged with a maximum output of up to 110 kW at an appropriate charging station. In around 40 minutes, the battery can be charged from 10 - 80 percent SoC (provisional data).

The EQC features the multimedia system MBUX—Mercedes-Benz User Experience —which has numerous EQ specific functions such as the display of range, charge status and energy flow. EQ optimized navigation, driving modes, charging current and departure time can also be controlled and set via MBUX.

The MBUX display has a special EQ tile where numerous EQ features are grouped. Alternatively the user can access the EQ menu of the MBUX system directly using a key in the lower left control panel. Thanks to natural language recognition, the EQ specific voice control helps the driver to operate the EQC. 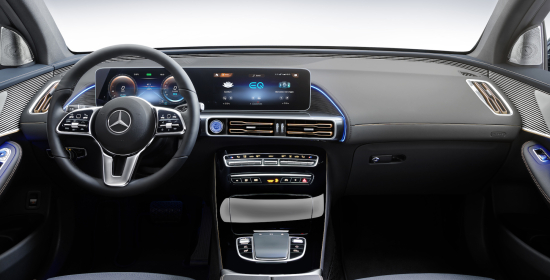 The EQC will offer intelligent services and functions focused on electromobility; those planned for market launch include:

The EQC is equipped with the latest generation of Mercedes-Benz driving assistance systems. In the Driving Assistance package, these include new functions such as predictive speed adjustment when approaching the end of a tailback: when a tailback is detected, Active Distance Assist DISTRONIC reduces the speed to around 100 km/h as a precaution. In a tailback on the motorway, the lane guidance system keeps the vehicle off-center to leave space for the emergency services.

The vehicle structure of the EQC has been adapted to suit the special requirements of the electrical components and battery, and is configured to achieve the usual high safety level. For example, a new subframe surrounds the drive components located in the front section, and this unit is supported by the usual mounting points.

The high-safety design begins with the installation position of the high-voltage battery beneath the vehicle floor. The energy storage unit is surrounded by a stable frame that can absorb energy. Deformation elements are installed between the frame and the battery, and these are able to absorb additional forces in the event of a severe side impact. A battery guard in the front area of the battery is able to prevent the energy storage unit from being pierced by foreign objects.

By market launch, 200 prototypes and pre-production vehicles of the EQC will have absolved tests covering several million kilometers across four continents (Europe, North America, Asia and Africa). The test program comprises more than 500 individual tests. In addition to the demanding standard test program. There are also special tests for the electric powertrain, the fuel cell, and the interplay of all powertrain components.

In the process the test experts are able to build upon the extensive findings from their digital testing work, used to ensure both the buildability of the vehicle and for the simulation of e.g. crash behaviour, aerodynamics and NVH: noise, vibration, harshness. In addition, there are intensive tests on numerous test rigs at the Mercedes-Benz Technology Center in Sindelfingen. The ratio between digital and real testing is roughly 35 to 65 percent.

Series production of the EQC will start in 2019 at the Mercedes-Benz plant in Bremen. The preparations for this are already fully under way. The new EQC will be integrated into ongoing series production as a fully electric vehicle.

One decisive innovation is the battery-joining center where the EQC undergoes a second “marriage” following installation of the two electric powerpacks in the bodyshell. This is where the EQCs are recognized as electric models with the help of data tags attached to the body, and equipped with a battery. The body is suspended from a C-carrier and deposited on a frame. Support arms raise the battery to the vehicle’s floor from below. An employee monitors the automatic bolting in place.

Alongside Bremen, the Sino-German production joint venture Beijing Benz Automotive Co. Ltd. (BBAC) is also preparing for the production start-up of the EQC for the local market.

Tesla Model X starts at $83k before incentives. The Performance model is $140k.

Good to see these all-electric crossovers appear on the market, in every price range.

UK prices will start from 55,000 pounds. With the all the options somewhere around the 80,000 pound range.