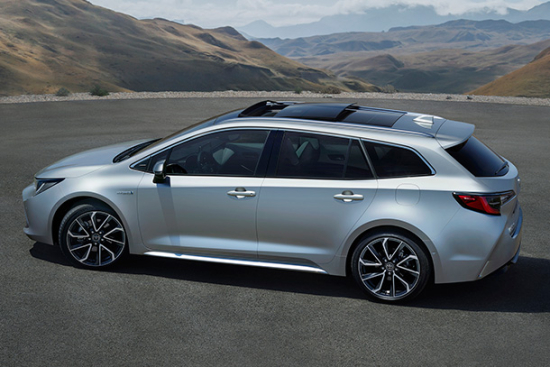 Reflecting the brand’s continued focus on hybrid technology, the Corolla Touring Sports will offer customers just one conventional engine—a 116 hp 1.2 liter turbo gasoline unit—and a choice of 122 hp, 1.8 liter or 180 hp, 2.0 liter hybrid powertrains. This latter is a unique proposition in this segment as no other conventional powertrain can offer the same combination of performance and low emissions.

A key advantage of the new GA-C platform is the possibility of a having a lower front seat hip point to lower the vehicle’s center of gravity and offer a more engaging driving position.

Handling and agility are due to the low mounting height of the engine, the low hip point of the seats and the location of the hybrid battery beneath the rear seats. In combination, these measures allow the Corolla Touring Sports to have a low center of gravity.

The new Touring Sports was styled in Europe at the recently opened Design Center in Zaventem. With the adoption of TNGA, the new wagon is no longer merely a variation of the hatchback, but has become a distinctly separate model in its own right.

Corolla is the best selling car and has been selling for 45 years.