Although rechargeable lithium–sulfur (Li–S) batteries promise high energy density storage—particularly attractive for electric vehicle applications—the technology is currently limited by the shuttling polysulfides between the battery’s electrodes. Polysulfides deteriorate the lithium side of the battery and reduce its ability to hold charge.

Now, Mohamed Alkordi at Zewail City of Science and Technology in Egypt and co-workers have fabricated a flexible metal–organic framework (MOF) coating (UiO-66-NH2@SiO2) for a commercial Celgard 2320 membrane that is placed between the lithium (anode) and sulfur (cathode) components of the battery.

The MOF acts as a molecular sponge that hinders the diffusion of the polysulfides. The coating not only enhanced the thermal stability and wettability but also other electrochemical properties such as ionic conductivity. An open-access paper on their work is published in the RSC Journal of Materials Chemistry A. 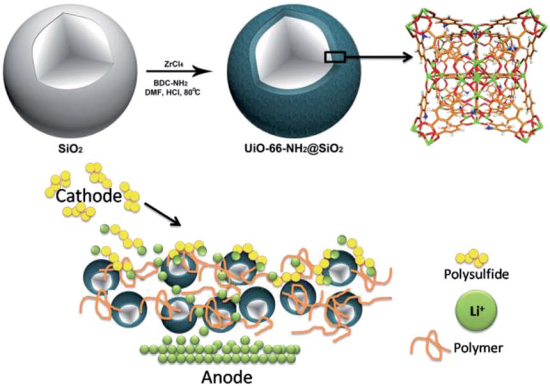 Synthesis of the UiO-66-NH2@SiO2 (top) and the perm-selective membrane (below) showing the proposed membrane action mechanism. Suriyakumar et al.

In comparison to other Li–S batteries, the team found that their novel membrane significantly improved the cell’s storage ability, retaining 98.5% of its capacity after 40 hours. It also had enhanced thermal stability and ionic conductivity.

The better performance of the Li–S cell with the UiO-66-NH2@SiO2 coated membrane is attributed to the complementary interactions between the amine-decorated MOF and diffusing polysulfide species. Herein, we presented a more facile, and transferrable, pathway to utilize tailorable MOFs as permselective separator materials, with wide potential for advancing the promising technology of Li–S batteries, as well as the potential to favorably impact other types of battery cells.

In comparison to other Li–S batteries, the team found that their novel membrane significantly improved the cell’s storage ability, retaining 98.5% of its capacity after 40 hours.

This sounds poor to me. 40 weeks would be better and possibly around normal storage loss.

The only reason I read the article was to see the improvement in cycle life. And that wasn't even mentioned.

The 40 hours is a self discharge number.