Mercedes-Benz Trucks unveiled the new Actros truck, featuring Active Drive Assist, with which Mercedes-Benz Trucks puts partially automated driving into series production. The new Active Drive Assist can brake, accelerate and steer independently. The new Actros can be ordered as of the IAA 2018 Commercial Vehicles Show and the first vehicles will be delivered to customers next spring. 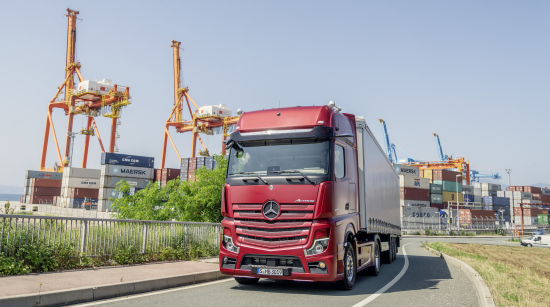 Unlike systems that only work at certain speeds, Active Drive Assist offers the driver partially automated driving in all speed ranges for the first time in a series-produced truck. New elements are the active latitudinal control and the combination of longitudinal and lateral control in all speed ranges through the fusion of radar and camera information.

Active Drive Assist builds upon the tried-and-tested adaptive cruise control with stop-and-go function and the lane-keeping assistant from Mercedes-Benz. While responsibility for monitoring the traffic situation remains with the driver, the system provides significant support and makes an important contribution to increased road safety.

With more than 60 innovations, the new Actros already puts the future of heavy-duty trucks on the road today. Just four years after the presentation of the Mercedes-Benz Future Truck 2025 driving in automated mode, we are launching the new Actros with the world’s first partially automated assistance system in a series-produced truck.

—Stefan Buchner, Member of the Daimler Trucks Divisional Board of Management and Head of Mercedes-Benz Trucks

Active Brake Assist 5 supports the driver when there is a danger of a rear-end collision or a collision with person crossing, oncoming or walking in the truck’s lane—also with an automatic full application of the brakes if necessary. A new aspect is that Active Brake Assist 5 now works with a combination of radar and a camera system. This allows it to monitor the space ahead of the vehicle even better and to react to persons in the road even better.

The fuel consumption of the new Actros is lower than that of its predecessor with savings of up to three percent on highways and up to five percent on country roads. Aerodynamic improvements have been achieved thanks to mirror-cams and new rear-edge flaps. The intelligent Predictive Powertrain Control (PPC) for cruise-control and gear shifting operates even more efficiently and can now also be used on country roads thanks to its expanded map material. In addition, a new, fuel-saving rear-axle ratio is in use.

Approximately 1.2 million units of the heavy-duty truck have been delivered to customers on all continents since the market launch of the first Actros generation in 1996. About a fifth of them belong to the second Actros generation, which has been produced since 2011.

The new Actros is produced at the Mercedes-Benz plant in Wörth, just like its predecessor. Numerous modifications have been made at the factory, not only due to assembly changes such as for the all-new cockpit, but also because of the growing proportion of information technology in the truck.

In preparation for the significantly increased functionality in the new vehicle, extensive qualification concepts were developed and intensive training courses were conducted for the production team. In particular, the use of touchscreens instead of switches and buttons requires considerable electronics expertise. Requirements also increased during the vehicle’s final check; each mirror cam is calibrated individually by the employees for example.