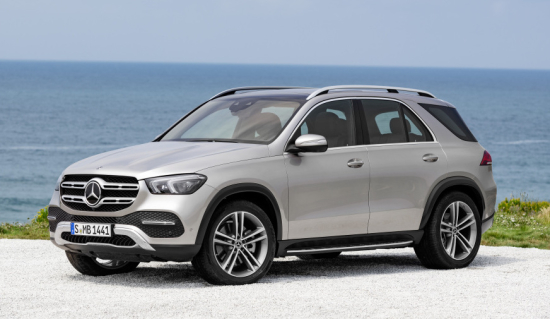 The GLE will receive a completely new range of engines on market launch in early 2019. At a later stage a plug-in hybrid variant with a particularly long range will be added to the drive portfolio. The prices for the new GLE will be made known on the sales release date in late autumn.

E-ACTIVE Body Control: 48 V suspension. Better ride comfort and agility plus completely new functions such as free-driving mode are provided by the optional E-ACTIVE BODY CONTROL suspension, which is now combined with the newly developed AIRMATIC air suspension. This is the only system in the market where the spring and damping forces can be individually controlled at each wheel. This means that it not only counteracts body roll, but also pitching and squat.

E-ACTIVE BODY CONTROL has a 48 V operating voltage and is available as optional equipment for engine variants with six and more cylinders. On poor road surfaces the system is even able to recuperate energy, roughly halving the energy requirement compared to the preceding system in the S-Class.

The hydropneumatics generate dynamic forces that overlay the air suspension forces and actively support and dampen the vehicle body, e.g. during linear and lateral acceleration or when driving on uneven roads.

Free-driving mode is a completely new off-road function: if the GLE has become bogged down in a sand dune, for example, this can help to free the vehicle more easily in many such situations. If possible the suspension level is automatically raised and lowered several times, which changes the ground pressure of the tyres and therefore improves traction—the GLE rocks itself free.

Individual wheel actuation is another new function for off-road driving. This allows the level at each wheel to be individually adjusted via the touchscreen of the media display, thus improving the vehicle’s attitude on rough terrain when e.g. one wheel is stuck in a ditch or a wheel spring is fully contracted.

E-ACTIVE BODY CONTROL in the GLE also has the curve inclination function CURVE: Like a motorcycle, the GLE leans into bends and thereby allows cornering in three stages with practically no centrifugal force. If the GLE is equipped with a stereo multi-purpose camera, ROAD SURFACE SCAN becomes possible: the camera continuously scans the road surface, the suspension responds in advance to any undulations before they are the vehicle drives over them, and they are substantially compensated.

It delivers 270 kW (367 hp) and 500 N·m of torque, with a further 250 N·m of torque and 16 kW/22 hp available via EQ Boost over short periods. The integrated starter/alternator (ISG) is responsible for hybrid functions such as EQ Boost or energy recuperation, while allowing fuel savings that were previously reserved for high-voltage hybrid technology.

ISG eliminates the need for a belt drive for ancillary components at the front of the engine, which reduces its overall length. The slim design, together with the physical separation of intake/exhaust, creates space for near-engine exhaust aftertreatment. The 48-volt on-board power supply serves not only high power consumers such as the water pump and air-conditioning compressor, but also the Integrated Starter Generator (ISG), which also supplies energy to the battery by means of highly efficient energy recuperation.

4MATIC all-wheel drive. In all variants of the new GLE, power is transmitted by the 9G-TRONIC automatic transmission. The broad ratio spread of gears one to nine allows a clearly perceptible reduction in engine speed and is a decisive factor behind the high level of energy efficiency and ride comfort. With the four cylinder engines, 4MATIC all-wheel drive is realized with a transfer case which transmits the drive torque to the axles in a fixed ratio of 50:50 percent. Spinning wheels are braked by braking intervention at the relevant wheel.

A transfer case with an electronically controlled multi-disc clutch is used for the other engines, e.g. in the GLE 450. This allows a variable transfer of drive torque from 0-100 percent (torque on demand) between the axles. Also new, and available as an option, is a transfer case specially configured for superior off-road driving characteristics. In addition to the controlled multi-disc clutch with torque-on-demand function, this has a reduction gear set and an automatic locking effect from 0-100 percent for off-road driving.

Also when driving on the road, and particularly when cornering, the two fully networked transfer cases with torque on demand allow a further improvement in handling safety and agility by specifically influencing the degree of yaw to induce oversteer or understeer.

Other innovations in the new GLE include:

The new Mercedes-Benz GLE will be presented to the public for the first time at the Mondial de l’Automobile in Paris (4 to 14 October 2018). It will be in the dealerships in early 2019 (US and Europe), and in spring 2019 in China. The GLE is produced in Tuscaloosa (Alabama/USA).

The air springs in the E class are expensive to replace when they fail, which they do.