With the opening of three new FAW-Volkswagen vehicle plants at three locations—in Qingdao, Foshan and Tianjin—as well as the Volkswagen FAW Platform Tianjin Branch component plant, the Volkswagen Group is strengthening its localization strategy in China. 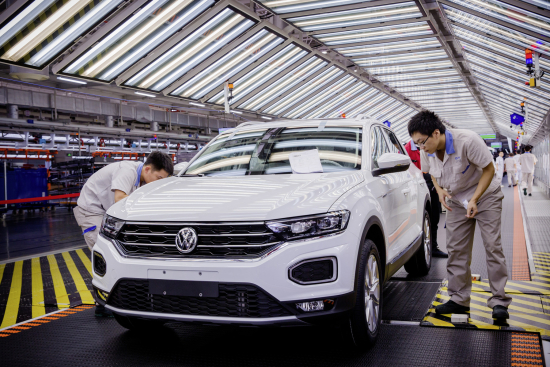 With the opening of a second vehicle production plant in Foshan, a mega plant has been built at the South Chinese location. In addition, vehicle and component plants in Tianjin, northern China, were bundled at a single location. Together with the existing gearbox plant, further synergies will be used there to increase production efficiency.

All four new factories significantly increase the flexibility of Volkswagen Group China to react more quickly to customer needs. At the recently opened FAW-Volkswagen factory in Tianjin alone, more than 300,000 SUVs will roll off the assembly line each year, thus forming the basis for Volkswagen Group China’s SUV campaign.

With an annual production capacity now of 600,000 vehicles per year, the Foshan plant plays a pioneering role in the Volkswagen Group’s electrification strategy (“Roadmap E”). In Qingdao, too, electrified vehicles will be able to roll off the assembly line alongside cars with combustion engines in future.

We continue to expect the car market in China to develop positively. Volkswagen Group China will continue to grow accordingly. With the total market size of around 24 million cars sold, growth rates in the lower single-digit percentage range in the vehicle market already mean growth rates of several hundred thousand vehicles per year. That is why we kicked off our SUV and electric mobility campaign in China in 2018, so that we can respond to the needs of our Chinese customers even better than before. At Volkswagen we strive for continued success in this important market.

In late August 2018, Volkswagen Group opened its new FAW-Volkswagen plant in Tianjin. SUV models, including plug-in hybrid versions, are produced here for the Volkswagen and Audi brands. Production capacity of the plant will be 1,200 units per day and 300,000 per year. In late June, Volkswagen FAW Platform Tianjin Branch opened a component plant to produce chassis for a variety of Audi and Volkswagen SUV models.

The opening of a second FAW plant in Foshan marks a significant milestone for the Roadmap E electrification strategy in China. Owing to the plant expansion in June 2018, annual production capacity in Foshan has increased from 300,000 to 600,000 vehicles. In addition to new SUV models from Volkswagen and Audi, the vehicles currently manufactured on the MQB platform are gradually being electrified. Moreover, by 2020, production of modular electric drive matrix (MEB) vehicles as well as MEB battery systems is set to commence here.

We want to make a significant contribution to electrifying the Chinese passenger car market. Around 40 different electric vehicle models are to be produced in China by 2025.

Production of Volkswagen models at the FAW-VW plant in Qingdao commenced in late May. This flexible manufacturing facility allows for MQB models with internal combustion engines as well as electric drive systems to be built on the same production line. FAW-Volkswagen will also produce battery systems for the MQB platform there.

The Volkswagen Group now has over 23 production sites in China and 123 worldwide.

The Volkswagen Group founded its first joint venture in China in 1984: SAIC Volkswagen, in which the Volkswagen Group holds a 50% stake. In 1985 the first Chinese series production model, the Santana, rolled off the assembly line here. Four years later, an additional joint venture followed with FAW-VW in Changchun. A third joint venture to develop and produce an electric vehicle was added together with China’s manufacturer JAC in summer 2017, in which the Group also holds a 50% stake.

The Volkswagen Group is represented in China with 12 brands and has delivered more than 35 million vehicles with its joint venture partners FAW (FAW-Volkswagen) and SAIC (SAIC VOLKSWAGEN) since entering the Chinese market in 1984. Volkswagen Group China has more than 100,000 employees at 34 Chinese production plants in 23 locations.

In 2017, approximately 3,000 dealers (with 330,000 employees) sold 150 different Volkswagen Group models totalling 4.18 million vehicles in the People’s Republic of China – this represents an increase of 5.1% as compared to the previous year. As of August 2018, the Volkswagen Group holds an 18.3% share of the Chinese passenger car market.

Wise to move where future markets will be. India may be the next place to go?