At the 69th IAA Commercial Vehicles show, Volkswagen Commercial Vehicles is unveiling five new zero-emission vehicles:the I.D. BUZZ CARGO, ABT e-Transporter, ABT e-Caddy, the Cargo e-Bike and the Crafter HyMotion which is equipped with a hydrogen fuel cell drive system.

I.D. BUZZ CARGO. One month ago, Volkswagen introduced the first new model in its electric mobility campaign, the new e-Crafter, with pre-sales of the electric van beginning this month. The electric campaign is now gaining momentum at the 2018 IAA Commercial Vehicles show. One highlight is the I.D. BUZZ CARGO concept—the first commercial vehicle to be based on the new I.D. Family and the modular electric drive kit (MEB). The vehicle could be launched as soon as 2021. 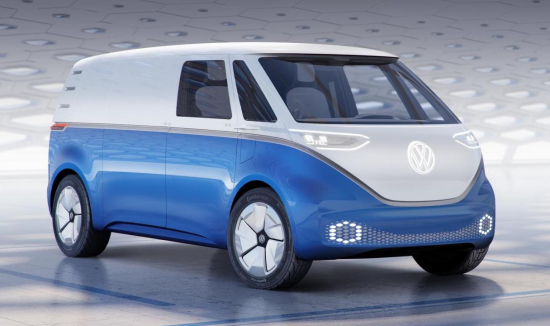 The models can be delivered with different battery sizes according to the vehicles’ intended use and budget. With the MEB it is possible—dependent on battery size and the model concerned—to achieve ranges of about 330 to more than 500 km (as per WLTP). If the transporter covers fairly normal distances in the city on a daily and weekly basis, a lithium-ion battery with an energy capacity of 48 kWh is recommended. If greater range is needed, the energy capacity can be increased up to 111 kWh.

Last year, the company presented the brand’s first all-electric van with the world premiere of the new e-Crafter. (Earlier post.) While the e-Crafter launched as a panel van with an overall length of 5,986 mm and a maximum payload of 1.75 tonnes, the I.D. BUZZ CARGO concept is positioned in the size class beneath the Crafter.

The electric drive of the I.D. BUZZ CARGO consists mainly of the electric motor with power electronics and 1-speed gearbox integrated into the driven rear axle, the lithium-ion battery and auxiliary units integrated in the front body.

Volkswagen Commercial Vehicles has combined the battery in the I.D. BUZZ CARGO being presented in Hannover with a 150 kW electric motor. The vehicle’s top speed is electronically limited to 160 km/h. An all-wheel drive system like the one implemented in its sibling model is conceivable.

The high-voltage battery of the I.D. BUZZ CARGO is charged by cable connection. Using fast charging systems operating at 150 kW direct current, the 48-kWh battery can be charged to 80% capacity in 15 minutes; for the largest battery expansion stage with an energy capacity of 111 kW it takes 30 minutes.

As an alternative, the high-voltage battery can be charged from any conventional household socket, charging stations with a wide variety of power outputs or wallboxes. Although the Bulli can be charged at 2.3 kW via a normal 230V mains, Volkswagen Commercial Vehicles offers wallboxes that operate at much higher power levels up to 11 kW. They are especially advisable for charging batteries to 100% at a company’s vehicle depot overnight (when electricity prices are often lower).

The battery system of the future production version has also been prepared for inductive charging, likewise with 11 kW of charging power. The concept vehicle has this technology already. 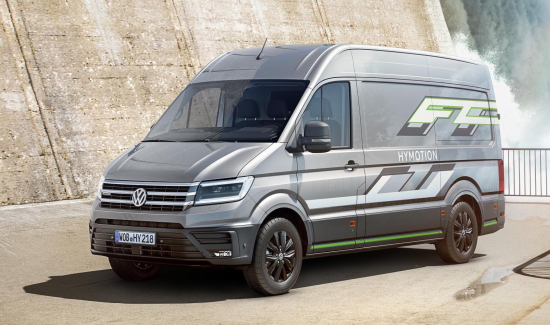 The Crafter HyMotion was specially designed for longer journeys: the longer the daily distance covered, the greater the appeal of the hydrogen fuel cell in large commercial vehicles.

Instead of the large traction battery of the e-Crafter, a smaller lithium-ion battery with an energy capacity of 13.1 kWh is at work in the Crafter HyMotion. The fuel cell system that delivers 30 kW of power serves as a range extender. Meanwhile, the Crafter HyMotion utilizes the same 100‑kW electric motor and gearbox as in the e-Crafter. The van’s fuel consumption is 1.4 kg hydrogen per 100 km.

Despite its significantly longer driving range, the Crafter HyMotion offers an even larger payload than the e-Crafter. The Crafter HyMotion is still a concept vehicle—but as soon as the infrastructure is right, according to Volkswagen, the van could launch with its zero emission electric motor.

The Crafter HyMotion is the second concept vehicle from Volkswagen Commercial Vehicles to feature a hydrogen fuel cell; it follows the Caddy Maxi HyMotion, which was first introduced in the “Hydrogen Road Tour” in 2009.

ABT e-Transporter. Volkswagen Commercial Vehicles has offered its Transporter model series for eight decades. Now the brand is connecting the best-selling vehicle’s drive system with electricity in a world premiere of a taxi concept: the ABT e-Transporter1. This concept car, designed together with the company Abt e-Line GmbH, is a zero-emission van designed to generate electricity at IAA Commercial Vehicles.

The battery system of the ABT e-Transporter is constructed to be scalable so that it can satisfy the needs of a wide variety of potential applications and budgets in a possible production model. In its base configuration, the Transporter comes with a lithium-ion battery that has an energy capacity of 37.3 kWh; the second battery version offers an energy capacity of 74.6 kWh. Driving ranges of the two versions are between 208 and 400 km.

ABT e-Caddy. The second model designed jointly by Abt e-Line GmbH and Volkswagen Commercial Vehicles is the ABT e-Caddy, which is also being shown in a world premiere at the IAA. It will arrive on the market in the middle of next year. Volkswagen Commercial Vehicles is also presenting the ABT e-Caddy as a taxi; it is based on the extended Caddy Maxi and therefore offers ample space for five people plus luggage.

With a range of up to 220 km (forecast NEDC figures), the zero-emission vehicle has been tailored for urban use in the environmental restriction zones of European cities. An 82-kW electric motor operates in the ABT e‑Caddy. The electric motor is supplied with electricity from a 37.3 kWh lithium-ion battery. The ABT e-Caddy, which has a top speed of 120 km/h, will be one of the most spacious electric vehicles in its class with a cargo compartment volume of 4.2 m3.

Cargo e-Bike. Volkswagen Commercial Vehicles is also introducing the brand’s first electric bike: the Cargo e-Bike. Market introduction of the three-wheel cycle will be in 2019. 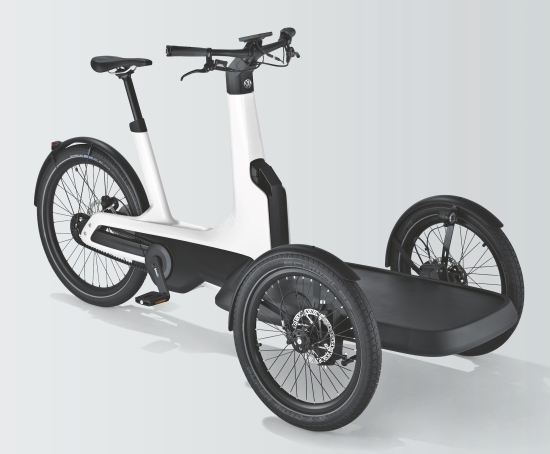 The Cargo e‑Bike is a pedelec (pedal electric cycle) that adds power assistance to its rider’s pedalling with a 250 Watt (48V) mid-mounted motor at speeds up to 25 km/h.

The pedelec can be used anywhere, even in pedestrian zones. Energy for the electric motor is supplied by a lithium-ion battery. The drive and rugged architecture of the cargo bike are designed for a maximum payload of 210 kg (including rider).

This vehicle—the smallest Volkswagen commercial vehicle ever—is equipped with two wheels at the front, with the load platform positioned low between them. Mounted on this load platform is a cargo box with a storage volume of 0.5 m3. Innovative kinematics of the front axle ensure that the goods being transported on the load platform do not tilt with the cargo bike when cornering, rather they remain horizontal and thereby stable. The new electric Cargo e-Bike will be produced at the Volkswagen Commercial Vehicles plant in Hannover.

It seems like they have been posting pictures of the I.D Buzz for years now. I don't understand why they just don't go out and build a few thousand which they can probably sell quite easily at any price to baby boomers who are nostalgic for the old camper vans ( I've seen circa 1980's restored vans listed for $40k+ on kijiji). This suggests to me there is a market out thee that isn't terribly concerned about price.

Tesla would probably build something similar if they weren't so busy building m3's, semi's, grid storage, solar roofs while at the same time staying out of jail and fighting defamation suits.

HyMotion...put in a reformer for diesel, get some real range without combustion.

VW has been talking for years about electric mobility but has produced nothing yet
Companies like Jaguar Nissan are already into production
Be should start delivering instead of talking and prototypes only.

That I.D. van is a winner out of the box; and, if they ever decide to get it to market, They will sell a million...2021 ain't soon enough.