At InnoTrans 2018, the International Trade Fair for Transport Technology, MAN Engines is exhibiting the D3876 LE63x for locomotives, which produces 471 kW (632 hp) at 1,800 rpm. One of its outstanding features is the in-line six, which meets the EU Stage V emission standard for locomotives without the need for an exhaust after-treatment system (EATS).

This means that a single technical solution equally covers emission requirements for all currently recognised emissions threshold values up to EU Stage V. As a result of not including an EATS, our engines can be used all around the world – whether at EU Stage V or in less strictly regulated markets. This provides a clear benefit for customers in terms of global vehicle sales and giving vehicles a second life.

There are also advantages for operators working in situations involving large proportions of light loads, as they can increase technical operational reliability while enjoying low overall operating costs.

The MAN D3876 LE63x, designed for use in locomotives and featuring a 138 mm bore as well as 170 mm stroke, generates a maximum torque of 3,000 N·m at 1,200 to 1,500 rpm. The 15.3-liter engine achieves its high torque plateau and optimum torque curve thanks to the VTG (variable turbine geometry) turbocharger and the injection system (which offers up to 2,500 bar).

The combustion this generates, which is optimized for the scope of application, ensures low fuel consumption—one of MAN Engines’ leading development objectives.

The modular EATS’ components from MAN Engines can be flexibly positioned. This allows customers to choose between a wide range of installation scenarios.

The D3876 in-line six engine is a system with top-class performance that has been an established fixture and a practical success in trucks since 2014. It was also released for agricultural technology applications in 2015 and applications in the construction industry in 2016.

The D3876 earned the Diesel of the Year 2016 title, in particular for its basic concept and high-strength materials. Now, in its D3876 development for locomotives which was previously presented as a concept at InnoTrans 2016, MAN Engines is closing the performance gap between the established in-line six and V12 motors for train applications.

Modular EATS. In addition to the D3876, which meets EU Stage V for locomotives without EATSs, MAN Engines will be exhibiting a modular EATS at its booth to meet current and future emissions thresholds for rolling stock. 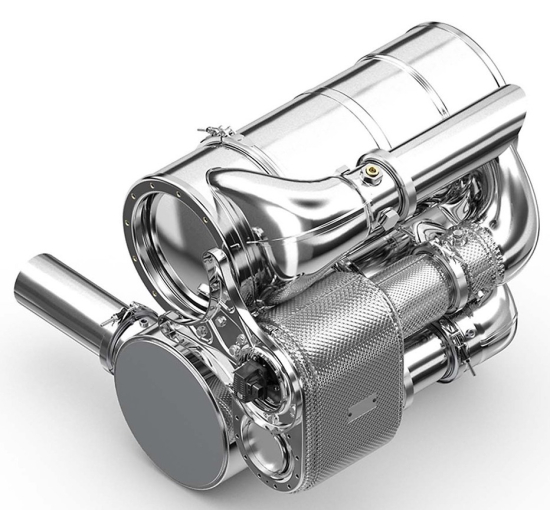 The modular EATS’ components from MAN Engines can be flexibly positioned. This allows customers to choose between a huge range of installation scenarios.

MAN’s engineers have designed the system (which has also become established in the truck sector) for the tough requirements away from the road and modified it for industrial needs.

Along with its robustness, the flexibility due to the separate positioning of mixers, SCR catalytic converters and particulate filters also offers a significant advantage. This gives customers more options to efficiently design their machines’ equipment areas, enabling them to take better account of criteria such as ease of maintenance and accessibility.

So, they brag that they can meet Stage V without aftertreatment. Fine. I just wonder if car manufacturers also will start bragging about that they can meet Euro 6d-TEMP without GPF on their gasoline cars. This limit was enforced from September 1 this year in the EU but I have not yet seen anyone point out clearly that they do NOT use GPF.