Brazil-based Volkswagen Caminhões e Ônibus, part of the TRATON Group, introduced the e-Delivery electric truck (earlier post)—a battery electric version of the company’s Delivery mode—at IAA Commercial vehicles. The model is in the test phase and is to go into production by 2020. 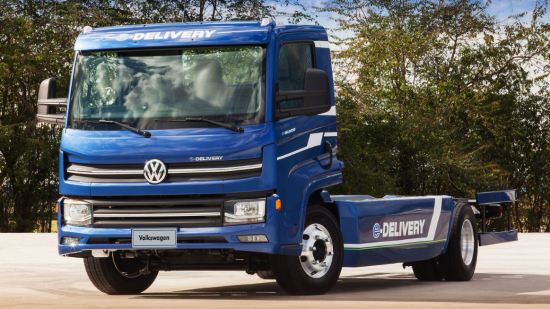 The company also introduced the e-Flex flexible architecture for the electrification of the Volksbus.

e-Delivery. The Brazilian team developed a new powertrain and battery pack for the electric truck. The lithium-ion-nickel-manganese-cobalt (NMC) battery pack supports a range of more than 200 km (124 miles). The battery has a quick-charging mode which reaches 30% capacity in 15 minutes and 100 percent in three hours. The new powertrain achieves an output of up to 260 kW with a maximum torque of 2,150N·m.

The truck’s modular configuration makes flexible assembly possible and provides more space for batteries. The vehicle is divided into three parts: a front module with the cabin and additional functions, a middle module with the batteries, and the rear module with the powertrain. The modules are independent of each other, so that the various components and designs can be easily combined for other electric vehicles as well.

The model presented at the IAA has also been improved with respect to its intelligent systems. Pneumatic suspension and a smart payload reading system, for example, synchronize the load and electricity consumption in the eco-drive mode.

The brake has three regeneration stages. This enables up to 30% of the power to be recuperated during braking. This energy is used to charge the battery. The regenerative brake engages before the pneumatic brake. The entire system can be adjusted according to the charging status or the driver’s preferences. Systems such as the air compressors, air conditioning, steering and water pump are controlled independently of each other, thus optimizing their electricity consumption. Axles, chassis, wheels and tires retain their traditional features and their robustness in the new Delivery line. They share platform components with the diesel vehicle family. Synergies and scaling can therefore reduce costs. 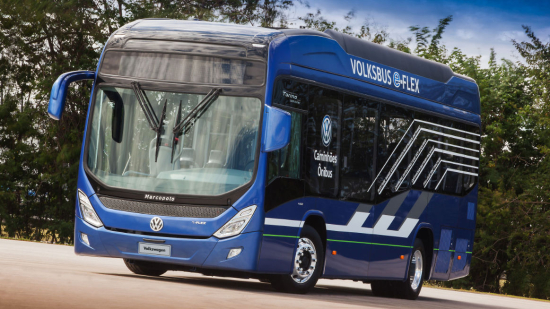 The batteries developed by the TRATON GROUP can be charged using external chargers or a generator in the vehicle. The generator is driven by the Volkswagen 1.4 TSI Flex, which is currently used in the Golf. This engine can be run on gasoline or ethanol, and a version for natural gas or biomethane (1.4 TGI) is also available.

The generator and engine set starts automatically by means of intelligent vehicle electronics as soon as the pre-programmed battery charging level is detected.