The United States has increased the production of petroleum in recent years, accounting for 16% of the World’s production in 2017, according to the US Department of Energy. 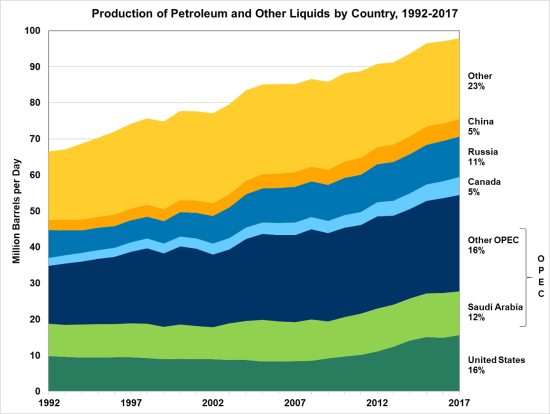 Most of this production increase comes from "tight oil", mostly in shale formations which must be fracked.

The extremely rapid decline rate of these wells means that the "sweet spots" which are currently providing this oil will be used up in a few short years.  Drilling effort must not only continue at a high pace to keep it up, but will have to expand as exploitation is forced to move to less-productive zones.  This is Red Queen territory; you have to run and run just to stay in the same place, let alone get anywhere.

Worse is the financial situation of the shale players.  I understand that few if any of them are cash-flow positive; they are expanding based on debt that revenues aren't sufficient to pay off.  This will end poorly, one way or another.  Default is inevitable.

Saudi-Arabia and Russia (the other major producers) are willing and able to reduce their production to push price up to $100+/barrel.

At $100+/barrel, all producers would be flooded with $$$$, including local US producers.

Gas prices will increase again to $3.50/$4.00+ in USA and so will pollution and GHGs with all those heavy SUVs, Pick-Ups, heavy cars etc.

Production of Hybrids, HEVs, PHEVs, BEVs/FCEVs will multiply as the price of bio-fossil liquid fuels go up.

it's certainly cool, but the entertainment industry (https://best-vegas.com/cirque-du-soleil/) in the US is developing much faster. And this is definitely much more useful for the environment.