The role of the gasoline engine is strictly to generate electric power. Because this engine always operates at its optimum condition, the e-POWER boasts 30% better fuel efficiency than cars powered by conventional gasoline engines with similar output 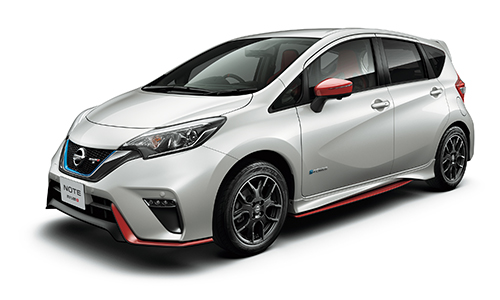 The result is 25% greater power and torque compared with the Note e-POWER NISMO.The car’s NISMO tuning creates an advanced driving sensation that takes full advantage of its e-POWER drive system. Popular with customers for its exciting acceleration and quietness, the innovative e-POWER system helped make the Nissan Note the best-selling registered car in Japan in the first six months of 2018, excluding minivehicles.

Also offered on the Nissan Serena minivan, the e-POWER system is a key part of Nissan’s electrification strategy. The company has a global target to sell 1 million electrified vehicles annually by fiscal year 2022, including fully electric cars and e-POWER models.

The Note e-POWER NISMO S offers a number of driving modes that allow for different driving styles, whether the driver is seeking outstanding performance for sports, or excellent fuel efficiency.

Have written extensively on Nissan's E-power technology. My latest take on it can be found in the following link: https://seekingalpha.com/article/4185100-nissans-e-power-technology-annihilating-toyota-prius-japan-can-also-threat-tesla-lithium