SEAT, a member of the Volkswagen Group, will introduce the first SUV powered by compressed natural at the Paris Motor Show. The new Arona TGI marks the fourth vehicle in SEAT’s line-up to benefit from the cleaner, cheaper fuel, joining the Leon, Ibiza and Mii. 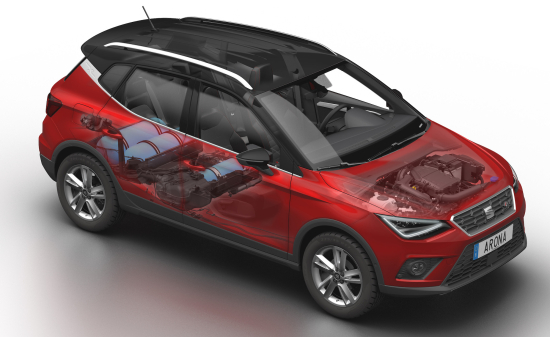 The Arona TGI has been designed, developed and will be produced at SEAT’s headquarters in Martorell.

SEAT is actively boosting CNG as the fuel forms a sustainable additional alternative. Furthermore the technology is compatible with the use of quality-assured, renewable biomethane, ensuring the long-term future of CNG as an alternative for low emission mobility.

The new SEAT Arona is powered by a three-cylinder, 12 valve 1.0-liter TGI engine with an output of 90PS available between 4,500rpm and 5,800rpm and maximum torque of 160 N·m at 1,900-3,500rpm. This powertrain will now come as standard with a six-speed manual transmission, helping to increase efficiency and driveability. 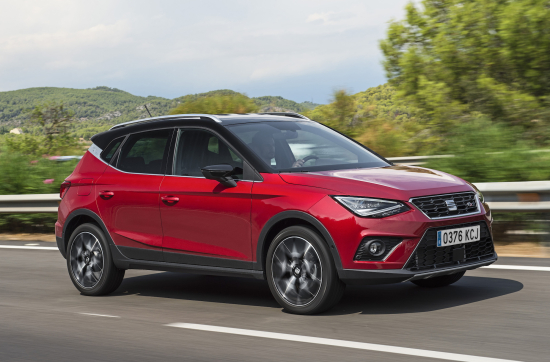 The CNG variant of the Arona features the same systems as those included in the 1.0-liter TSI gasoline version, but integrates components that allow it to run on compressed natural gas. The Arona TGI includes three CNG tanks located under a specific rear floor pan, a filler neck next to the gasoline filler neck, stainless steel gas pipes, gas pressure sensors and an electronic pressure regulator that efficiently controls gas distribution to the TGI engine.

Internally, the 1.0-liter engine has been developed to include chrome-nickel covered pistons that incorporate new segments that are modified to use with gas as well as reinforced valves, valve seats, and on the intake and exhaust valves the closing ramps are flattened to increase wear resistance. The turbocharger is lighter, so the turbine responds immediately.

One of the challenges of CNG is cold weather starting, so although the Arona TGI is primarily powered by gas, to counter this, the vehicle starts the engine with gasoline when exterior temperature falls below -10 °C (14 ˚F), and then starts a heating process for the gas injectors, prior to the automatic activation of the CNG circuit when conditions allow.

The Arona TGI only uses gasoline as an alternative fuel when the CNG tanks are empty, although with three tanks the gas range should be more than enough for most users. The SUV has a gas tank capacity of 14.3 kg giving a range of 400 km (249 miles) in CNG mode. With the automatic switch to gasoline, the range is extended by an additional 160 km (99 miles).

At 4,138mm, the Arona TGI is 79 mm longer than the Ibiza and 99 mm taller, maintaining its greater ground clearance and higher driving position. Even with the gas tanks integrated under the trunk floor, the Arona offers 282 liters (10 cubic feet) of luggage capacity.

When windows have been lauched any new function then i have always learned carefully in this time when windows share that how to fixes connections to bluetooth audios device and wirelesses display in window 10 then it is really important for those who getting work first time in this operating system.