The US Department of Energy (DOE) will renew the Joint Center for Energy Storage Research (JCESR), a DOE Energy Innovation Hub led by Argonne National Laboratory and focused on advancing battery science and technology (earlier post). DOE plans annual funding for JCESR of $24 million, for a total of $120 million over the five-year renewal period.

Established in late 2012, JCESR is a partnership made up of national laboratories, universities and an industrial firm, with the original goal of “5-5-5”—batteries that are five times more powerful and five times cheaper within 5 years. 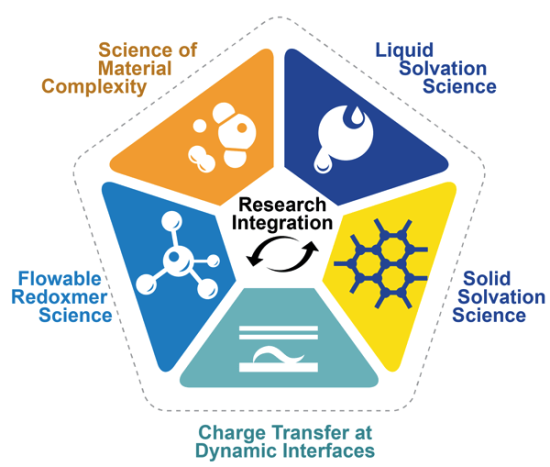 Each of the five JCESR research Thrusts pushes the boundaries of scientific understanding, integrates with the other Thrusts, and advances the overall performance of prospective energy storage systems.

JCESR’s first five years have yielded important science breakthroughs, helped launch three startups—Blue Current, Sepion and Form Energy—and produced more than 380 published scientific papers. The knowledge we’ve gained has introduced new approaches to battery R&D and will guide our research in transformative materials for next generation batteries for many years in the future.

In addition, using computational methods, JCESR researchers screened more than 24,000 potential electrolyte and electrode compounds to help accelerate the search for new battery architectures, data that was made publicly available to the broader battery research community.

Over the next five years, JCESR’s vision is to create disruptive new materials deliberately constructed from the bottom up, in which each atom or molecule has a prescribed role in producing targeted overall materials behavior.

Future JCESR research will be aimed at energy storage technology for a host of emerging applications, including resilient future electric grids, distributed energy management for more reliable and efficient energy delivery under all conditions, fast-charging electric vehicles and even regional electric flight. While energy storage remains the key for all of these applications, no single battery type is capable of filling all the widely varying requirements.

What is needed, according to Crabtree, is a range of designer batteries, each tailored to the requirements of its host application. At the same time, each of these designer batteries must perform multiple, often competing tasks such as frequent cycling and long life, high energy density and slow self-discharge, or fast charging with little or no safety risk. The mission of the renewed JCESR is to create the science to, in the words of Crabtree, “lay the foundation for a diversity of next-generation batteries for a diversity of uses.”

This group has had 5 years to meet their goals...they didn't; what they did was prove their original goals were not attainable and have spent the taxpayers money to prove what wouldn't work. So, now they receive funding for another 5 years to: "lay a foundation for batteries"???
How does one board this never ending gravy train?

The good news is that next year the advanced battery market will exceed $100 billion meaning there will be billions of dollars of profits to finance research and expansion.

Go to the web site to see what work they did over the years, it all advances the state of the art, that is the nature of research.

This is informative, thank you. I believe that these issues should be discussed as a matter of priority at the state level. There were written a lot of research on this topic and I also use https://researchpapers.io/we-can-easily-write-research-paper-for-money/. Nuclear power and solar panels deserve special attention today. I think everyone was convinced of the gross consequences with neglect in this area.