US consumed 20% of world petroleum in 2017; smaller share due to increased world consumption

The United States consumes more petroleum than any other single country, accounting for 20% of world consumption in 2017, according to the US Department of Energy (DOE).

Despite a 2.8 million barrels per day (mmbd) increase from 1992 to 2017, the United States is responsible for a smaller share due to increased world consumption. The total amount of petroleum consumed world-wide grew from 67.2 mmbd in 1992 to 98.4 mmbd in 2017. 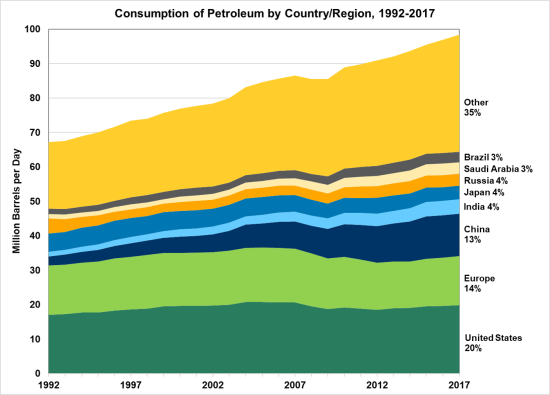 With about 5% of the world population, USA burnt 20% of the world bio-fossil fuels. That is nothing to be proud of? Not very good for pollution and GHGs.

Japan and Russia seem to be the only industrial countries with a reduced consumption?

China's increase (35%) looks like a lot but is a lot (6 to 8 times) less than their huge increase in production in the same period?

The accelerated introduction of electrified vehicles in Japan, China, So-Korea and many EU countries will lower fuel consumption in the next 10 years but the introduction of larger SUVs and Pick-Ups in USA will consume even more.