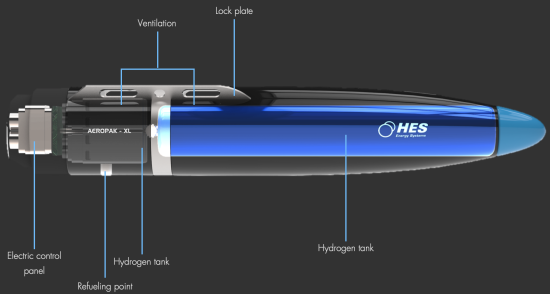 The swappable hydrogen propulsion system scales from single systems for drones to multiple systems in parallel for manned electric flight. 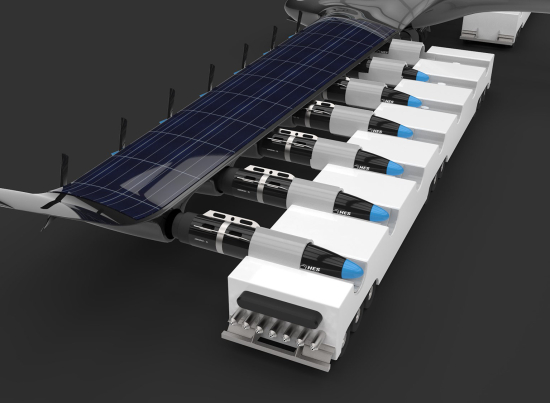 Element One is designed to fly 4 passengers for 500 km to 5000 km (311 miles to 3100 miles ) depending on whether hydrogen is stored in gaseous or liquid form. This performance is several orders of magnitude better than any battery-electric aircraft attempt so far, opening new aerial routes between smaller towns and rural areas using an existing and dense network of small-scale airports and aerodromes.

Originally from Singapore, HES has been working with a number of fast-moving start-ups and SMEs in France over the past year and exploring various locations to execute its Element One vision, including Aerospace Valley, the global aviation R&D hub located in Toulouse. Parent company H3 Dynamics has been a symbol of intensifying technological cooperation between the two countries as part of the 2018 Year of Innovation.

Refueling Element One will take no more than 10 minutes using an automated nacelle swap system that applies AGVs (automated guided vehicles) and automated warehouse operations such as those used by Amazon and Alibaba.

In an effort to explore new business models that help position Element One into new travel segments, HES has aligned its zero-carbon aviation roadmap with Wingly, a French startup that offers flight sharing services for decentralized and regional air travel.

We analyzed the millions of destination searches made by the community of 200,000 pilots and passengers on our platform and confirm there is a tremendous need for inter-regional transport between secondary cities. By combining autonomous emission free aircraft such as Element One, digital community-based platforms like Wingly and the existing high density network of airfields, we can change the paradigm. France alone offers a network of more than 450 airfields but only 10% of these are connected by regular airlines. We will simply connect the remaining 90%.

Targeting a first flying prototype before 2025, HES is in the process of building a technical and commercial consortium involving both the aviation and hydrogen eco-systems.

That plethora of nacelles adds a lot of surface area and parasite drag.  The tanks also have much more surface area and thus heat gain than a simple pair of tanks.  It would be much more efficient to have just two tanks/pods on the wing with the appropriate motor/propeller to drive airflow past each one.

Something that's obvious in an electric aircraft but isn't mentioned in this piece is advanced boundary-layer control.  The boundary layer is moving slowly relative to the aircraft and is left moving at considerable speed relative to the ambient air, so it represents a resource for recapturing its momentum and leaving less energy behind as the aircraft flies (drag).  Aside from perforated skins with air pumps, the next-best way to capture this energy is probably with span-wide pusher (not tractor) propellers.

Of course design will have to be improved but fully automated small passenger H2 planes (together with FCEVs, LDVs, Trucks, Buses, trains and ships) are a possibility during the next decade?

This is a very complicated system and expensive for a 4 place plane. Much better to have a single fuel cell sufficient for cruise with a limited battery to smooth out power demand for takeoff and climb and then have multiple motors and propellers.