Electrify America announced its next $200-million investment in Zero Emission Vehicle (ZEV) infrastructure as well as education and awareness in California which is outlined in its Cycle 2 California ZEV Investment Plan submitted to the California Air Resources Board (CARB). Cycle 2 is a 30-month investment period, which begins in July 2019. 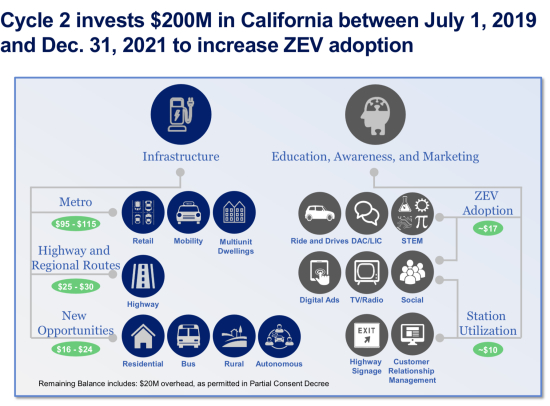 The second cycle investment will build on Electrify America’s initial priorities and expand into new areas, where the need for electric vehicle charging stations and technology are greatest or are most likely to be used regularly. Consistent with the guidance of CARB, Electrify America plans strive to ensure that 35% of Cycle 2 investments are in low-income or disadvantaged communities.

Highlights of the California Cycle 2 ZEV Investment Plan include:

Electrify America also will continue to invest in the six Cycle 1 metros:

These metro areas are expected to account for 89% of expected battery electric vehicles (BEVs) in operation through 2022, according to a 2017 Navigant report. The DC Fast Charging stations will be placed in retail locations but also consider the needs of adjacent multi-unit dwellings where Level 2 (L2) residential charging deployment is oftentimes challenging. Electrify America also will invest in DCFC stations specifically targeting shared mobility drivers: car share, taxis and transportation networking company (TNC) drivers.

Highways & Regional Routes: The new Cycle 2 investments announced today will continue to build out a highway network of DCFC stations featuring charging power up to 350 kilowatts which can refuel a vehicle at up to 20 miles of range per minute. This will include building new sites connecting regional destinations, such as supporting travel to the Sierra Mountain communities and destinations like Lake Havasu.

Residential: The primary, most convenient and cost efficient fueling option for many drivers is residential charging. The Office of Energy Efficiency & Renewable Energy at the Department of Energy reports that EV drivers conduct ‘more than 80% of their charging at home.’ However, the cost and complexity of installing home charging can be a barrier to ZEV adoption for some buyers, especially in low-income communities. To address this need, Electrify America will develop a comprehensive residential charging solution.

First, Electrify America will develop an online tool that promotes and connects EV buyers with the wide range of residential charging incentives and rebates already available in California and simplifies the application process. This program will be designed to integrate with CARB’s recently announced ‘one-stop-shop,’ which focuses on incentives for the ZEV purchase itself, and together these offerings will provide customers support throughout the entire purchase process.

In addition, Electrify America will offer ‘no-money-down’ residential chargers and installation, enabling buyers who cannot or choose not to pay for the L2 charger installation at home. The cost of installation will be incorporated into a monthly fee.

Finally, Electrify America will develop a platform that will allow drivers with a home charger to earn financial rewards for plugging in and supporting a demand response platform for grid electric power stability.

Bus and Shuttle Charging: To help spur adoption in this sector, Electrify America plans to collaborate with transit operators to provide charging infrastructure at depots, layover points, and on key routes. This approach offers another means of serving disadvantaged and low-income populations who rely on public transportation.

Rural: To further support the adoption of ZEVs in rural communities in California, Electrify America will deploy L2 chargers in rural areas with a potential focus on health care facilities and education institutions located in the Central, Coachella and Imperial Valleys.

Autonomous: To support the growth of autonomous ZEVs, Electrify America will build up to two commercial deployments of charging stations for autonomous electric vehicles where this need is emerging.

Renewable Generation: Electrify America will invest in renewable generation for select stations to help to reduce station operating costs and reduce the carbon content for EV refueling which is consistent with California’s broader air quality goals.

Education and Awareness: In Cycle 2, Electrify America will invest in additional education, awareness, and outreach activities to help drive ZEV adoption. Efforts will primarily focus on boosting awareness and consideration by informing the general public on the benefits of ZEVs through traditional media advertising, similar to Electrify America’s Cycle 1 “JetStones” TV/radio campaign. Electrify America’s marketing outreach will continue to coordinate with ZEV awareness initiatives by collaborating with key non-profit organizations such as Veloz.

Electrify America will continue to support the Green City Initiative in Sacramento. The initiative, which includes two ZEV car share programs, two BEV bus/shuttle services and substantial investments in associated charging infrastructure, will showcase new uses of ZEV technology while promoting increased ZEV usage across many channels serving low-income or disadvantaged communities. While these programs are funded in Cycle 1, the services—and benefits—of this $44 million Cycle 1 investment will launch and be fully operational during Cycle 2. Electrify America will provide strategic guidance and operational support for these services over the course of Cycle 2.

The California Cycle 2 ZEV Investment Plan benefited from collaboration with the California Air Resources Board and Staff and a comprehensive national outreach period, during which Electrify America received more than 700 submissions and spoke with more than 100 individual submitters. The company held community meetings across California focused on local government and community-based organizations and engaged with California’s leading academics at UC Davis, UCLA and the National Laboratories.

Electrify America was established to implement the $2 billion ZEV Investment Commitment outlined in Volkswagen’s Court-approved settlement involving 2.0L TDI diesel vehicles in the United States. The investments will be made in four, 30-month investment cycles that will direct $800 million in electric vehicle infrastructure, education and access programs in California, one of the largest ZEV markets in the world; $1.2 billion is budgeted for states outside California through 2026.

Under the Consent Decree for this settlement, investment decisions are Electrify America’s to make and plans are subject to review by the California Air Resources Board (CARB) and the Environmental Protection Agency (EPA) for consistency with the requirements of the Consent Decree.