The millimeter-wave radar transmits a radio wave and receives its reflection from an object to measure the distance between itself and the object. The algorithm incorporated into the product tracks and predicts the movement of pedestrians by analyzing characteristic information conveyed by the reflected wave. This technique enables the products to detect pedestrians behind passing vehicles.

One difficult challenge for a millimeter-wave radar is covering a wide range in close proximity and extending the detectable distance. Sumitomo developed multiple-channel antennas and a signal processing technique that uses them, enabling a wide detection area for the detector installed on a pedestrian signal pole near the crosswalk. Thus the product detects pedestrians both in the waiting area in close proximity and those on the crosswalk, whether the crosswalk is small or large. Owing to this feature, the detector can be installed in a greater variety of locations.

The number of traffic fatalities has been decreasing in Japan year by year (3,694 in 2017). While elderly adults (65 and older) account for more than half of the death toll, drastic reduction has not been seen for this group. Early implementation of measures to address this is therefore a high priority. 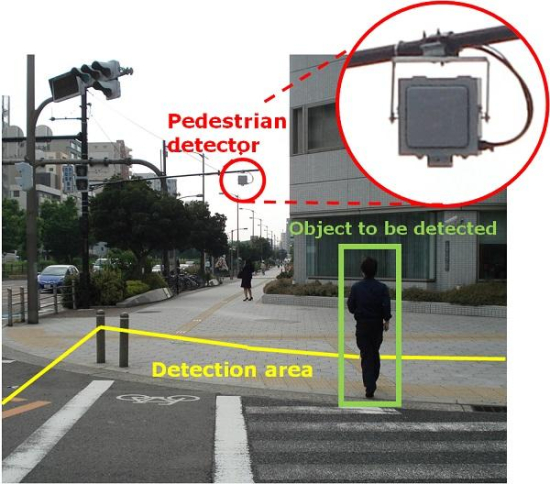