At present a substantial amount of energy is required to run the CCS within electric vehicles, creating a major drain on the battery and limiting the range of the car. The EU-funded Horizon2020 XERIC project addressed this challenge by producing an energy-friendly CCS capable of ensuring passenger comfort and increasing the range of electric vehicles. 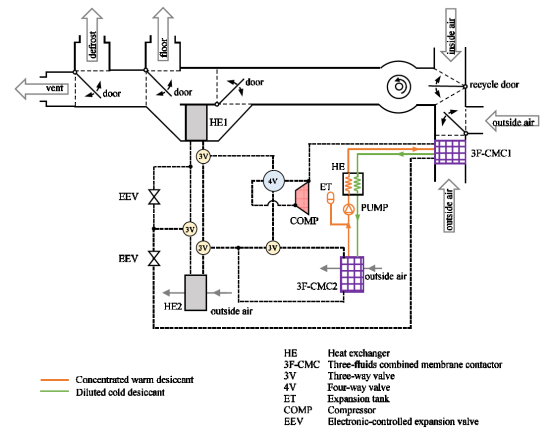 Consortium members developed a solution based on a hybrid system that combines a liquid desiccant cycle, which combats humidity, with a traditional vapor compressive cycle that deals with temperature.

Whereas a traditional CCS condenses water, the XERIC system removes water using an innovative and highly compact three-fluid-combined membrane contactor (3F-CMC), which works simultaneously with air plus a desiccant solution and a refrigerant.

The humidity in the air is captured by the membrane interface, allowing dry air to be circulated within the vehicle and reducing the amount of energy required by the battery to dehumidify the air.

Researchers created modeling tools to predict the performance of the entire CCS as well as the 3F-CMC and carried out life-cycle analysis and life-cycle cost analysis assessments. In addition, they developed polytetrafluoroethylene and polyvinylidene difluoride hydrophobic membranes with an average pore size of 0.2 micrometers. They also built an electronic control system based on a variable frequency drive compressor and a brushless direct current motor that is 85-95 % efficient.

Project partners successfully demonstrated the XERIC CCS prototype under a range of external air temperatures in a climatic chamber to replicate the relevant environmental conditions.

Although XERIC developed and tested these technologies specifically for expanding the range of electric vehicles, their potential extends far beyond this particular application. The system is also suitable for improving air conditioning in traditional vehicles equipped with an internal combustion engine, resulting in reduced fuel consumption and related air pollution.

Similarly, the XERIC CCS can be easily adapted to other forms of transport such as buses, trams, trains, caravans, and boats. Furthermore, the system can be applied to other situations where humidity needs to be reduced and energy efficiency improved. Examples include public buildings, hospitals and industry (such as for refrigerated rooms).

The working prototypes are now ready to be modulated according to market needs and project partners are exploring industrial partnership opportunities, particularly with original equipment manufacturers and tier-one suppliers to tailor the XERIC innovative system to the required dimensions.