DOE: vehicles per thousand people in China in 2016 was similar to the US in 1923

Vehicles per thousand people in 2006 in China was similar to the United States in 1915, but ten years later, the number has grown to approximately the same as where the United States was in 1923, according to the US Department of Energy (DOE).

The figures below show the number of motor vehicles per thousand people for various countries/regions. The data for the United States are displayed by the black line which goes from 1900 to 2016. The color points labeled on that line show data for the other countries/regions around the world and how their vehicles per thousand people compare to the United States at two different points in time, 2006 and 2016.

The lower part of the figure (1900-1930) is enlarged in the second figure below. The countries/regions on the lower figure with the greatest increases in the ten-year span were China, Brazil, and Central and South America.

Vehicles Per Thousand People: US (over time) compared to other countries (in 2006 and 2016) 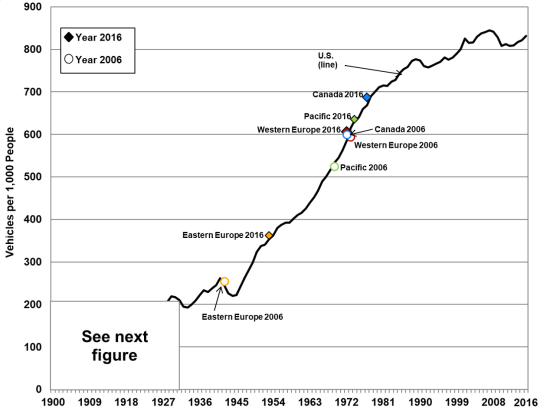 Figure inset: Vehicles Per Thousand People: US (over time) compared to other countries (in 2006 and 2016) 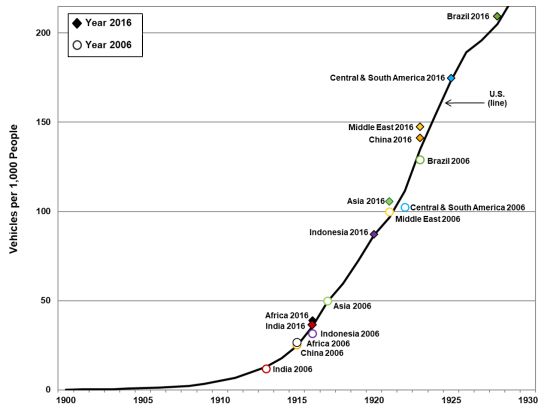 The rate of change may be more significant than vehicles per capita.

Very high speed passenger e-trains and e-buses would show the opposite, where China is the world leader and is probably more important than the number of polluting ICEVs per capita?