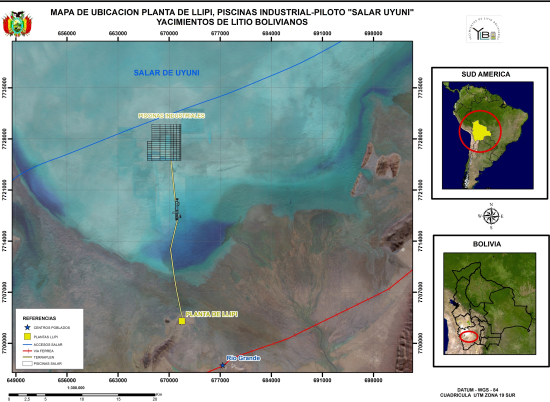 The signing of the partnership agreement by YCB and ACISA represents an important milestone in the realization of the Bolivian-German lithium project. The partnership also guarantees Germany access to the metal. Salar de Uyuni in the Bolivian Andes is the world's largest known lithium deposit— around ten million tons.

The consortium around ACISA offers state-of-the-art technology, plants and machinery to establish a value-added chain in Bolivia in the mid-term, from extracting the raw material lithium through producing cathode material right up to manufacturing battery systems as end-products.

Apart from the use of leading-edge technologies, another key aspect is environmentally and socially-compatible implementation, for example by using renewable energy.

Furthermore, knowledge will also be transferred as Bolivian employees undergo training and qualification courses. This will create between 500 and 1,000 direct jobs and up to 10,000 indirect jobs in Bolivia in areas such as transport, logistics and services.

The start of the production of lithium as a raw material is scheduled for the second half of 2021. By the end of 2022, the goal is to achieve an annual production capacity of 35,000 to 40,000 tons of lithium hydroxide. Further expansion of this capacity is planned.

Parallel to signing the founding protocol, the scoping phase has begun, in which plans will be reviewed and defined. This process is expected to be completed in December 2018.

A public-private joint venture between YLB and ACISA, in which the Bolivian state-owned company holds a majority stake of 51%, is also to be set up by the end of this year. YLB-ACISA’s tasks include the precise definition of the areas of activity and the detailed preparation of business and environmental plans for the project companies that will subsequently be established. The joint venture will also be responsible for designing the technical and economic implementation of the project.

ACI Systems Alemania GmbH (ACISA) is a member of the ACI Group based in Zimmern ob Rottweil in Southern Germany. The group of companies develops innovative and sustainable manufacturing solutions for the photovoltaic, battery and automotive industries. This includes applications for the manufacture of battery systems, energy storage systems and generators for electric mobility, solar power plants, as well as the extraction of raw materials and materials for these sectors.

Within the group, ACISA is responsible for technology and project management. Among other things, this includes identifying and evaluating innovative technologies and corresponding application industries. ACI Systems Alemania GmbH is also concerned with sales and project development & management.