A research team led by Daegu Gyeongbuk Institute Of Science And Technology (DGIST) Professor Jong-Sung Yu in Korea, with colleagues at UC Berkeley and Xi’an Jiaotong University in China, has successfully developed a new catalyst synthesis method that can efficiently decompose water into oxygen and hydrogen using solar light. A paper on their work is published in the journal Applied Catalysis B: Environment. 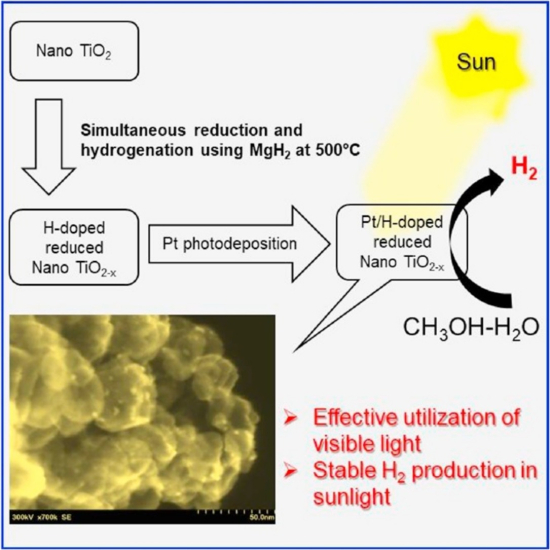 The simultaneous reduction and hydrogenation of TiO2 by [Mg] and [H], respectively, offer efficient hydrogen-doped reduced TiO2-x photocatalyst systems which exhibit high efficiency (16.1 mmolg−1h−1) for solar hydrogen production from methanol-water in the presence of only 0.25% of photodeposited Pt nanoparticles with excellent performance stability. The photocatalyst system possesses sufficient low recombination of the photogenerated charges and also utilizes a reasonable amount of visible light. Sinhamahapatra et al.

Here we report a gold-colored H-doped TiO2-x (H:TiO2-x) nanoparticles prepared by controlled reduction via simultaneous presence of [Mg] and [H], which are obtained from the decomposition of MgH2. The H-doped TiO2-x exhibits a significant activity (16.1 mmolg−1h−1) and remarkable stability after Pt deposition for solar-driven H2 generation from methanol-water.

With Professor Samuel Mao’s team at UC Berkeley in the US., Professor Yu’s research team developed a new H-doped photocatalyst by removing oxygen from the photocatalyst surface made of titanium dioxide and filling hydrogen into it through the decomposition of MgH2.

Energy with long wavelength—including visible light—could not be used for the existing white titanium dioxide because it has a wide band gap energy. However, the development of MgH2 reduction could overcome this through oxygen flaw induction and H-doping while enabling the use of solar light with 570nm wavelength.

MgH2 reduction can synthesize new materials by application to titanium oxide, as used in this study, as well as the oxides composed of other atoms such as Zr, Zn, and Fe. This method is also applicable in various other fields—in photocatalysts and secondary batteries, for example. The photocatalyst synthesized in this research has four times higher photoactivity than the existing white titanium dioxide and is not difficult to manufacture, thus being very advantageous for hydrogen mass production.

Another characteristic of the photocatalyst developed by the research team is that it reduces band gap more than the existing titanium dioxide photocatalyst used for hydrogen generation and can maintain four times higher activity with stability for more than 70 days.

The photocatalyst developed this time is a synthesis method with much better performance than the existing photocatalyst method used to produce hydrogen. It is a very simple method that will greatly help commercialize hydrogen energy. With a follow-up research on improving the efficiency and economic feasibility of photocatalyst, we will take the lead in creating an environment stable hydrogen energy production that can replace fossil energy.

Methanol is one of the inputs, and the other products of the reaction are NOT mentioned.  The actual content is behind a paywall.  What are the odds that this is just a non-thermal method to convert MeOH into H2+ CO2?  I'd bet 100%.