Mercedes-Benz is delivering the first new third-generation plug-in hybrids—labelled EQ Power—to customers now and over the coming months. Mercedes-Benz is initially using this type of powertrain in the C-Class, E-Class and S-Class.

The 13.5 kWh battery in the hybrid vehicles is paired with either a gasoline engine or, for the first time, a diesel engine. Another first is the combination of plug-in-hybrid technology with a fuel cell in the new Mercedes-Benz GLC F-CELL (combined hydrogen consumption 0.34 kg/100 km, combined CO2 emissions 0 g/km, weighted electrical consumption 13.7 kWh/100 km). (Earlier post.) 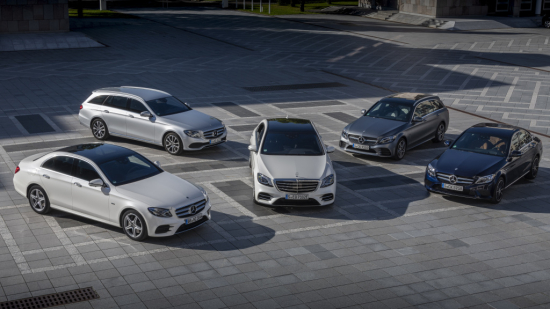 It is combined with the OM 654 four-cylinder diesel engine for the first time in the C-Class. The system output is 225 kW/306 hp. The result is a vehicle that can cover a distance of up to 57 km (NEDC) on electric power alone with zero local emissions. The combination of diesel engine and electric motor offers outstanding motoring comfort, exceptional pulling power and high efficiency thanks to the 9G-TRONIC 9-speed hybrid transmission. Delivery of the first models is scheduled for mid-2019.

The modified components and the intelligent powertrain management's new anticipatory functions give the customer enhanced electric performance and, last but not least, added convenience thanks to faster charging times. The efficiency of the 9G-TRONIC plug-in-hybrid transmission and a new lithium-ion battery in the luxury saloon are good for an all-electric range of up to 50 kilometers in the NEDC. The hybrid drive system in the S 560 e combines the 270 kW (367 hp) of the V6 petrol engine with 90 kW of EQ Power. 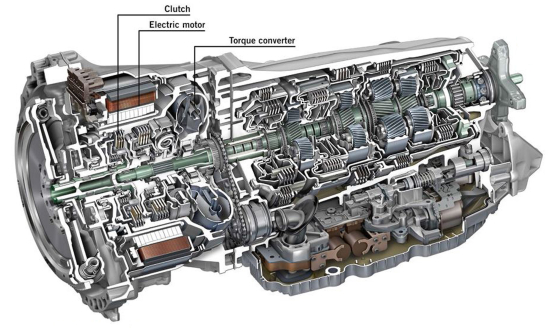 All of the benefits of the basic transmission are retained, including the exceptional motoring comfort, barely perceptible gear shifts and, in the case of the E-Class, a high towing capacity.

The most powerful version of the transmission with a transmissible torque of up to 700 N·m is used for hybrid operation to enable the combined power of the combustion engine and electric motor to be used if required. The exceptionally efficient 9G-TRONIC 9-speed hybrid transmission helps to improve the efficiency of the powertrain, especially in electric mode.

One of the main benefits of the new hybrid traction head is its compact design, which was achieved thanks to the innovative integration and connection of the separating clutch, torsional vibration damper and torque converter lockup clutch within the rotor of the electric motor. This results in the transmission being slightly longer than the 9G-Tronic basic transmission, but only by 108 mm.

In contrast to the second-generation traction head, in which the electric motor was connected directly with the transmission input and a wet start-off clutch was used as a starting and separating clutch, a torque converter between the electric motor and the transmission now takes care of starting off. The separating clutch has been improved with respect to drag torque, now that it no longer has to deal with starting off, in order to reduce losses during electric mode.

90 kW electrical output for all plug-in hybrids. Developed together with Bosch as part of the EM-motive joint venture, the electric motor was newly designed for the 9G-TRONIC plug-in hybrid transmission and is based on the principle of a permanently excited synchronous motor as an internal rotor.

The likewise new, significantly enhanced power electronics have allowed significant increases in power and torque density. A peak output of 90 kW and a start-off torque of 440 N·m make for an effortlessly superior driving feel even in all-electric mode and allow top speeds in excess of 130 km/h.

The stator is permanently integrated in the traction head housing, while the rotor is between the powerflow of the separating clutch and transmission input. On-demand stator and rotor cooling allows use of the electric motor's peak and continuous output without any problems.

More energy stored in greater density, for a longer electric range. A key factor in increasing the electric range to around 50 kilometers is the nominal capacity of the new lithium-ion battery, which has increased to 13.5 kWh, while the size of the battery has been kept the same.

The evolution of the cell chemistry from lithium-iron-phosphate (LiFePo) to lithium-nickel-manganese-cobalt (Li-NMC) made it possible for the cell capacity to be increased from 22 to 37 Ah. The highly efficient battery system comes from the Daimler subsidiary Deutsche ACCUMOTIVE. The power electronics are housed in the engine compartment.

On-board charger with 7.4 kW capacity. The new on-board charger more than doubles the charging capacity from 3.6 kW to 7.4 kW and strikes an ideal compromise between size, weight and charging capacity. A discharged battery can thus be fully recharged in 1.5 hours at a wallbox, for example in the convenience of one’s own home. The same is possible in around five hours even at a conventional domestic power socket.

Electrical pre-entry climate control for the interior. The high-voltage on-board electrical system supplies not only the powertrain components and the vacuum pump of the regenerative braking system, but also the electric refrigerant compressor and the high-voltage heater booster. Both allow pre-entry climate control of the interior not only in summer but also in winter because they can also operate without the combustion engine.

Intelligent operating strategy. Third-generation hybrid technology supports the driver with further-improved, intelligent powertrain management. It comprises all processes that access the on-board energy supply and influence consumption, including the hybrid operating strategy, i.e. the interaction between electric motor and combustion engine, the transmission gear shift strategy, thermal management, i.e. the energy-efficient control of the cooling circuit of the combustion engine and electrical components to maximize the electric range, recuperation management and, in the case of the diesel hybrids, even particulate filter regeneration.

Through the extended use of data from the navigation system and information from the camera and the radar sensors, third-generation hybrid vehicles can look ahead well beyond the driver’s field of vision and adjust to the specific speed/route profile. Events such as negotiating towns on the way to the destination are taken into account when planning the available electrical energy, and during recuperation and thermal conditioning of the powertrain components.

ECO Assist helps to save energy. The new hybrids provide the driver with comprehensive assistance in terms of predictive driving and fuel-saving: the driver is prompted when appropriate to come off the accelerator, e.g. because there is a speed limit approaching, and assisted by innovative functions such as gliding and energy recovery based on anticipatory data. For this purpose, navigation data, traffic sign recognition and information from the intelligent safety assistants (radar and stereo camera) are linked and processed.

ECO Assist takes the following traffic situations and information into account in its driving recommendations and efficiency strategy:

ECO Assist continuously generates coasting simulations in the background: depending on the state of charge of the battery and the traffic situation, it computes whether the vehicle should ideally be allowed to coast with the lowest possible driving resistance with the driver’s foot off the pedals, or whether it should be decelerated so that the battery can be efficiently charged (recuperation).

Within the limits of the system, ECO Assist controls the overrun mode according to the situation as soon as the driver takes their foot off the accelerator. The driver is also given a visual prompt to do this: by a “foot off accelerator” symbol in the central display (or, if installed, in the Head-up Display). At the same time, a diagram gives the driver the reason for the recommendation (e.g. “Junction ahead” or “Gradient ahead”).

To increase the driver’s motivation to follow the recommendations of ECO Assist, the on-board computer records how many kilometers/for how much time during a journey the car was driven with the engine off, and shows this in the central display. The reward not only takes the form of reduced fuel consumption, but also an increased electric range.

Four hybrid modes. Depending on the driver’s wishes, four operating modes can be preselected. They are:

People with access to H2 stations and quick charging facilities would be better off with the hybrid/FC model with less pollution and GHGs.

Nice to see that gasoline and diesel are now treated equally when it comes to hybridization. The only option missing would be the 245 hp 500 Nm version of the 2-liter diesel in the S-class (I cannot possibly see the need for a 6-cylinder engine in this application). The problem here seems to be that the transmission's capacity is limited to 700 Nm. An upgrade to 800 Nm would be nice. At the other end of the power spectrum, the new 1,6-liter diesel at 160 hp would be a good candidate for hybridization. The fuel consumption of this option would be spectacular in charge-sustaining mode.

@HarveyD
Considering how H2 is produced today, the hybrid/FC would have equal - or higher - GHGs. The second problem is that there are no H2 stations. The H2/FC is a dead horse.

@peter, I agree on the 1.6 Hybrid - it would be great for the C and E.
I would even go further and have a 0.8 PHEV for the C and smaller cars (or a serial hybrid, although that would be a different best entirely).