DOE: sales of crossover vehicles are up 116.9% in the last ten years

From 2007 to 2017 new light-duty vehicle sales increased from 16.1 million to 17.1 million vehicles—an increase of 6.5%. In this time frame, crossover vehicle sales have increased by 116.9% while sales of most other vehicle types declined, according to data from the US Department of Energy (DOE).

Sales of new cars, sport utility vehicles, and vans have declined by more than 15%. Pickup sales increased by a modest 2.8% in the ten-year period. 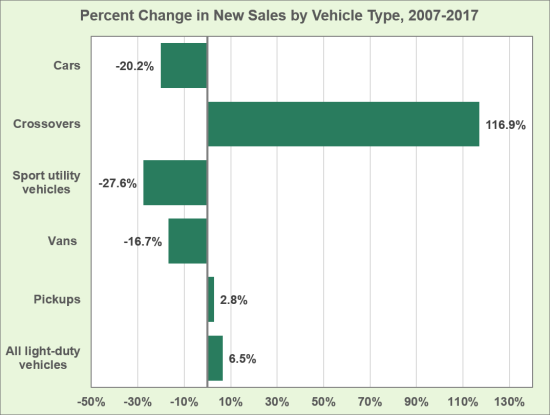 A crossover is a vehicle built on a car platform that has features of a sport-utility vehicle. Examples of crossovers include the Chevrolet Equinox, Ford Escape, and Honda CR-V.