The ICCT: Nearly half of the world’s EVs are in 25 cities; China leads the way 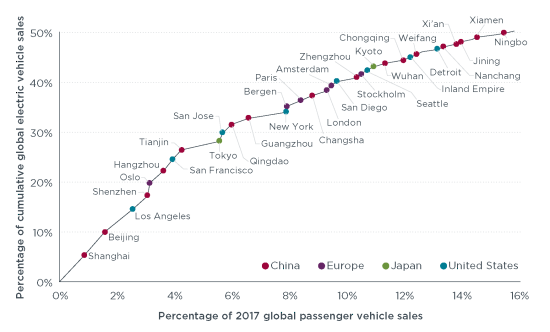 According to the ICCT report, major cities such as Beijing and Shanghai have implemented strong policies not found outside China, including large incentives and licensing and registration privileges for electric vehicles, to simultaneously tackle congestion and air quality. Other leading markets in Europe and the United States have similar but less extensive versions of the incentives and policy approaches of China.

The report also finds that the top electric markets are beginning to solve the infrastructure challenge. The EV capitals use multi-faceted strategies to spur infrastructure investment, such as adopting building and parking codes to ensure broad access to charging over the longer term. The top 25 electric vehicle markets have, on average, about 24 times the available charging per capita as elsewhere. However, the report notes, charging availability varies greatly among leading markets.

A comprehensive policy package is necessary to launch the electric market. Nearly all global electric vehicles (98%) are in China, Europe, Japan, and the United States, which have regulations to ensure electric vehicle model availability, incentives to reduce vehicle price, infrastructure to ensure convenience, and campaigns to educate consumers. Comprehensive local-level policies are also a distinguishing feature of top electric vehicle markets.