Nissan unveiled the Frontier Sentinel, a concept pickup truck designed by Nissan Brazil’s styling studio, at the 2018 São Paulo Motor Show. The concept is designed for rescue missions in all types of Brazilian terrain. 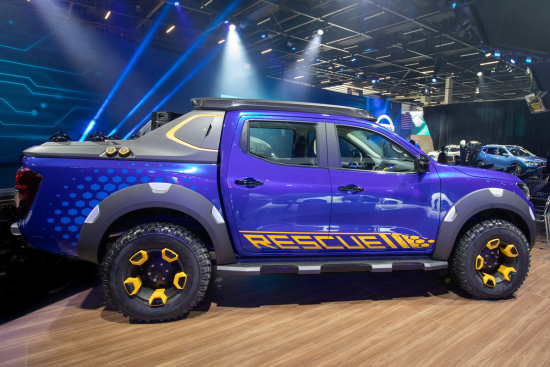 Frontier Sentinel integrates a host of features, including two battery packs from the Nissan LEAF to deliver auxiliary power. The cargo bed has been adjusted to accommodate the battery packs and also features a set of drawers to store gloves, flashlights, helmets, ropes, axes, toolboxes and other equipment.

The top part of the cargo bed has a deployable platform from which a drone can take off and land. A strengthened roll bar stretches across the sides of the cargo bed, which features more space to store rescue equipment and two power outlets.

Frontier Sentinel also stands out for its snorkel, which lets it navigate deep-water crossings, and a special lighting system on top of the windshield. Inside, the truck has an Electric-Yellow dashboard and central console. Inspired by electric circuits, it’s the same shade of yellow as on the seat trim and stitches.

In addition to the two all-electric vehicles, the Nissan booth will feature TV screens and lights powered by “second-life” batteries from the LEAF. The Nissan XMotion Concept crossover and a Nissan X-Trail with a hybrid powertrain are also among the models on display.

The new Nissan LEAF is now available through a pre-sale program in Brazil, Chile and Colombia. Argentina will join the program in 2019.