Volkswagen unveiled the Tarok Concept to the world at the São Paulo International Motor Show (6 to 18 November). The all-wheel drive all-rounder combines the progressive features of the latest generation of digitally networked SUVs with the versatility of a five-meter pick-up. 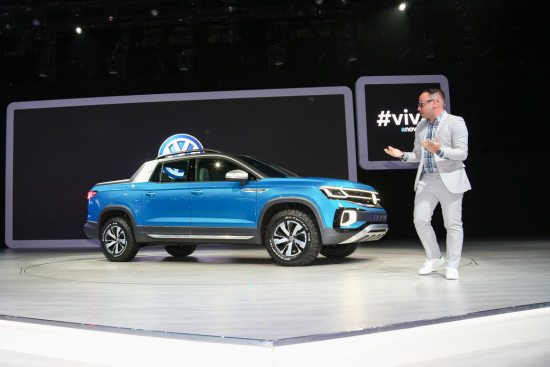 The Tarok Concept is powered by a 1.4-liter 110 kW / 150 PS four-cylinder TSI engine, which can be driven in Brazil as a TotalFlex Fuel Unit both with pure ethanol (E100) as well as a gasoline-ethanol blend (E22). The TSI engine in the Tarok Concept is also combined with a 6-speed automatic gearbox and permanent 4MOTION all-wheel drive.

Its innovative new features include a large variable loading area, which can be extended using the folding rear panel in the four-door double cab.

One important design feature in the five-seater Tarok Concept is its variable loading area concept. The floor space can be extended by opening the tailgate or using the mechanism that allows the bottom of the passenger cab rear panel to be folded down. As a result, drivers can also use the back of the cab to transport extra-long items. Analogous to this variability, the maximum load is correspondingly high at around one tonne.

Volkswagen will soon be offering a series version of the Tarok Concept on the market in Brazil, with barely any changes. The pick-up also has the potential to boost Volkswagen’s model range in other global markets. The future series model will start out with a 2.0-liter turbo diesel direct injection (TDI) TSI engine that also delivers 110 kW / 150 PS.

It would be interesting to see the emission performance at low ambient temperatures with both E100 and E22 in this direct-injection engine. For those of you who are not fully up-to-date on this topic, I could mention that MPI engines running on E85 have severe problems (as earlier studies have clearly shown) with hazardous emission components (e.g. PAH) under such conditions. This is when you compare to gasoline (diesel has much lower emissions of such compounds).

The mixup between TDI and TSI at the end of the article is somewhat amusing.

This is Brazil  you're talking about here.