The latest monthly report from Veloz—a public-private coalition of major electric car industry stakeholders— shows that this month the state will sell its 500,000th electric car. As of the just-released numbers, the state has just under 9,000 sales to go before it hits the goal. The data is aggregated from a number of trusted sources, Veloz says.

September electric car sales for the nation more than doubled from a year ago. The Tesla Model 3 is now the fourth-best-selling passenger car in the US. But, even with California capturing almost 50% of national electric car market, almost 70% of counties across the state received a failing grade for ozone pollution caused by tailpipe emissions. 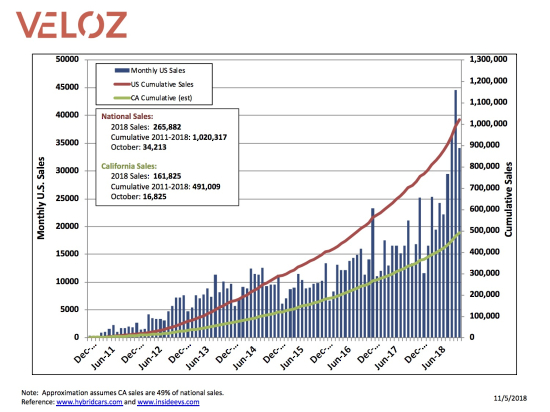 Surprisingly, electrified light vehicles sales reached 8% of total sales in Canada during the last quarter, mainly in BC, Quebec and Ontario.

Unfortunately, this trend may not last long because Ontario (with almost 40% of Canada's population) will stop EV subsidies on 01 Jan 2019 and, to make matter worst, will reduce taxes on liquid fuels by 10 cents/L, increase electricity by up to 10% to cover increasing NPPs/NGPPs maintenance cost and to cover the $1/beer promised.