Renewable diesel net supply to California’s fuel market has increased since the state’s Low Carbon Fuel Standard (LCFS) program went into effect in 2011, reaching 100 million gallons during the second quarter of 2018, or 10.1% of the total diesel supplied to California that quarter, according to the US Energy Information Administration (EIA). 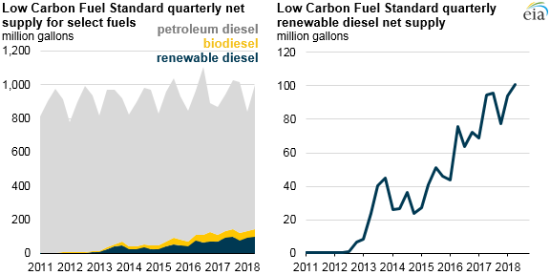 Source: US Energy Information Administration, based on California Air Resources Board.

The LCFS program, which is administered by the California Air Resources Board, sets standards to decrease the carbon intensity of motor gasoline and diesel fuel incrementally by at least 10% by 2020 relative to a 2010 baseline.

To comply with the LCFS, petroleum refiners, importers of motor gasoline and diesel, and wholesalers of motor transportation fuel are required to either produce low carbon fuels or purchase credits to demonstrate compliance. The mechanism used to regulate the LCFS is a measurement called carbon intensity, which is an estimate of a fuel’s lifecycle greenhouse gas emissions.

The credits generated by renewable diesel producers have some of the lowest carbon intensities of any of the LCFS-approved liquid fuel pathways. The average carbon intensity of renewable diesel, measured in grams of carbon dioxide equivalent per megajoule (gCO2e/MJ), has been about 30 gCO2e/MJ since spring 2016. Source: US Energy Information Administration, based on California Air Resources Board.

Under the LCFS program, renewable diesel generates a large number of credits relative to other fuels because it has some of the largest lifecycle greenhouse gas reductions compared with other fuels. The total volume of LCFS credits associated with renewable diesel exceeded that of fuel ethanol for the first time in 2018, reaching about 870,000 mt of carbon dioxide equivalent during the second quarter of 2018.

I recall a number of 2 billion gallons per year of frying oil used in the United States.  If 75% of this becomes waste, then there's a hard limit of roughly 1.5 billion gallons of "renewable" diesel before having to use virgin feedstocks.

100 mgpy is almost 7% of that level.  If California mandated 100% "renewable" diesel, it would consume ~70% of the available quantity.  This is clearly a niche product, as it cannot scale.

I believe EPA estimates that ~3 billion gallons of waste cooking oil are currently produced by restaurants per year in the U.S. That's still a rather limited supply for renewable diesel though.

2017 US distillate fuel consumption averaged 3,932,000 barrels per day, or 60.3 billion gallons per year.  3 billion gallons of waste fryer oil makes a good lubricity additive to that, but not much more.