For the first time in the United States, Toyota will offer the Corolla in hybrid form. Details on the 2020 Corolla Hybrid for the US will be announced during Toyota’s press conference at the LA Auto Show in less than two weeks.

Toyota unveiled new sedan models in the Corolla series (known in China as “Corolla” and “Levin”) in a world premiere at the Guangzhou International Automobile Exhibition. 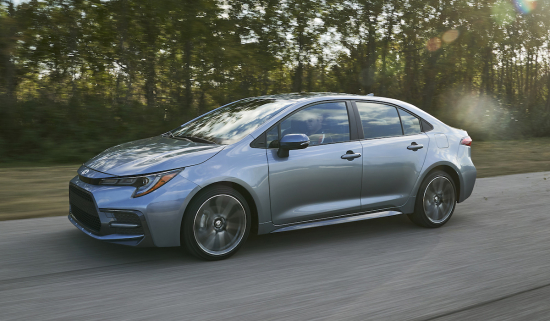 Sales in the United States and Europe are scheduled to start in spring 2019. The new models will gradually be rolled out in more than 150 countries and regions, including the start of sales of the new Corolla and Levin in China after mid-2019. In Japan, new sedan and wagon models, based on the Sporty model, will be optimized for Japanese customers and roads, with sales launch slated for within 2019.

Corolla is Toyota’s all-time best-selling car series, with more than 46 million cars sold worldwide (including derivative models) since the first generation was released in Japan in 1966. With each new generation, Corolla has evolved. New advanced features and functions have been introduced to suit the needs of the time, all the while inheriting its core DNA―reliability and usability―from the very first generation.

Based on the Toyota New Global Architecture (TNGA) initiative to structurally transform vehicle development, the new platform has been unified globally within the present 12th generation, including the hatchback model that went on sale in summer 2018, and the wagon model released in regions such as Europe in early 2019. The new generation hatchback and wagon models in Europe and other countries and regions also take the Corolla name, further strengthening the Corolla brand.

Hybrid models equipped with the latest hybrid technologies will be introduced in more than 90 countries and regions. The new models are also equipped with upgraded advanced safety features in the form of the latest Toyota Safety Sense, with specifications and availability refined for each market.

In China, the new models come standard with an onboard Data Communication Module (DCM), an integral component of Toyota Connected. Connected services will be introduced across all grades, providing “just-in-time” services and offering security and peace of mind to customers 24/7. Other examples include Apple CarPlay and Amazon Alexa compatibility in the United States, and services in Europe that allow the car to be connected to an operator in emergency situations and the dispatch of rescue vehicles based on the car’s location.

US market powertrain. In the US, the 2020 Corolla sedan L, LE, and XLE grades will use the 1.8-liter engine (2ZR-FAE) found in the previous generation, yet with more horsepower and better fuel efficiency. The XSE and SE grades are powered by a completely-new 2.0-liter Dynamic-Force direct-injection inline four-cylinder engine (M20A-FKS). This new engine delivers more performance while using less fuel. The new Corolla sedan engine is physically smaller and lighter, helping to lower the car’s center of gravity and improve its overall balance.

The new Dynamic Force engine gets it high power and efficiency from a combination of high compression ratio (13:1), Toyota D4-S fuel injection combining direct and secondary port injectors, high-speed combustion, VVT-iE intelligent variable valve-timing on the intake side and VVT-i on the exhaust. VVT-iE uses an electric motor instead of oil pressure to control the variable valve timing.

All of those technologies, along with ultra-low internal friction, yield a maximum thermal efficiency of 40%, very high for a passenger vehicle engine. The engine delivers 169 peak horsepower at 6,600 rpm and 151 lb-ft (205 N·m) peak torque at 4,800 rpm.

The new Dynamic-Shift CVT (continuously variable transmission) combines the smooth, fuel-efficient performance of a CVT with a more direct driving feel of a traditional geared automatic. The key to its distinct performance feel is a physical first gear used for start-off acceleration, before handing off to the CVT’s pulley system.

Because the launch gear is handling the higher input load at launch, the size of the CVT’s belt and pulley components could be reduced, yielding shifting speeds that are 20 percent faster than in a conventional CVT.

For those who want to shift for themselves, the 2020 Corolla sedan offers an intriguing choice with the all-new 6-speed iMT (intelligent manual transmission). Like some premium sports cars, it features downshift rev-matching control, automatically detecting when the driver is shifting and quickly rev-matching to make any driver a stick-shift pro.

New control logic improves acceleration feel when starting off, and improved shift feel makes this a stick shift you want to use. Increased use of micro polishing on gear teeth reduces cabin noise. Standard Hill-start Assist Control (also on the CVT models), helps prevent roll-back when starting off on an incline.

Platform. A super-rigid structure, lower center of gravity and highly refined suspension tuning endow the Corolla sedan with exemplary handling agility and ride comfort, along with a distinctive driving personality. This high-strength platform is fortified through the increased use of ultra-high-tensile steel as well as the application of new structural adhesive technology for enhanced body rigidity and occupant safety. Specifically, torsional rigidity is improved by 60% compared to its predecessor.

A squared figure-of-eight reinforced ring-shaped structure around the door openings, along with larger-diameter impact beams for the front and rear doors, are designed to help in the event of a side collision.

The inherent established superior quality and Toyota's experience with HEVs may make the Hybrid Corolla a number one seller?

A PHEV version with enough near future superior quick charge batteries, for up to 50+ Km, could also quickly become a best seller.

Given the Corrolla’s popularity they might achieve a modicum of success but odds are their first full CY of production will be their zenith.

Toyota is progressively going from high quality ICEVs, HEVs, PHEVs, BEVs and FCEVs with most efficient small and large units. They still have up to five in the best 10 sellers list and is still the world number one.

So far, only German, Chinese and Korean producers can match them.

Eventually, China with a total production of close to 30 million units/year and a huge local market will lead.

@Harvey, The problem is cost - people will only pay so much for a Corolla, and this might not stretch to a PHEV version.
@gasbag, I would disagree with the notion that parallel hybrids are dead. The Prius sales have indeed declined, but this can be put down to dreadful styling, low price of oil and increased competition.
As i suggested to @Harvey, a PHEV Corolla may be too expensive for most people.
Interesting to see how well the Nissan e-Power vehicles are doing in japan.
IMO, some kind of hybrid is the way forward because you can size the battery to the average journey length, rather than some rarely used maximum journey length.

The success of the serial hybrid ePower Note and Serena does does not bode well for Parallel hybrids. Serial hybrids are a simpler and more cost effective design. More importantly they don’t force customers to choose between efficiency and performance. Serial hybrids also should be more adaptable as it is a simpler modification to increase the battery capacty and add s plug or replace the ICE with a FC as the respective technologies advance.

So sadly just another fuel car.
When are they going to wake up and give us a plug and and at least 50 mile battery range.
Looks like I will be replacing my Corolla with a car from another maker.

PHEV's price and range could be addressed with the use of modular (plug-in modules). One to six, five (5) kWh modules could match range and price to customers needs.

Just another dull car from Toyota. Basically, they had an advantage in the late 1990's by having the first mass produced hybrid and then they blew it by hanging on to the same architecture too. I drove one of the early Prius cars that a colleague had bought. My impression was that it did not do anything weird which was good but other than that it was a relatively dull car that I would not want to own. It got better mileage but I got about 10 mpg less than my colleague thought that I should because I tried to drive in my normal rather non-aggressive mode and not in some super-mileage mode.

Corolla sells 500,000 units worldwide each year, this should increase that.