A team at Imperial College London has examined the relative costs of carbon mitigation from a lifecycle perspective for 12 different hydrogen production techniques using fossil fuels, nuclear energy and renewable sources. An open-access paper on their work is published the RSC journal Energy & Environmental Science.

As with all comparisons between fossil routes and renewables, cost and emissions data are frequently misused by advocates of all parties to push policy-makers and public opinion further along the polarizing debate of the role of fossil fuels in a low-carbon system. The best approach to decarbonizing hydrogen supply at least cost is not to champion or demonize specific technologies, but to jointly provide evidence to policy-makers to support higher levels of climate ambition.

Ultimately, the development of low-CO2, large-scale and economically competitive hydrogen production processes is fundamental to the production of low-carbon fuels, fertilizers and other petrochemicals. To achieve this, there is a significant amount of research going on to improve the performance of existing methods and to find new promising routes to generate hydrogen.

Their results show a trade-off between the cost of mitigation and the proportion of decarbonization achieved. The most cost-effective methods of decarbonization still utilize fossil feedstocks due to their low cost of extraction and processing, but only offer moderate decarbonization levels due to previous underestimations of supply chain emissions contributions. 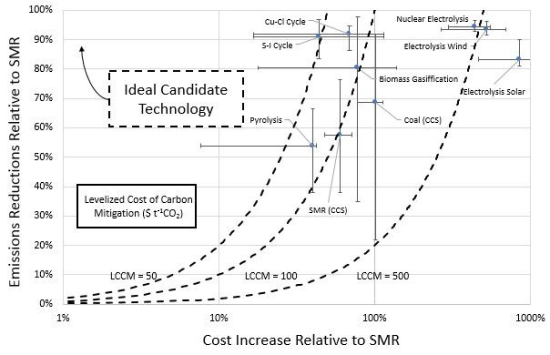 Methane pyrolysis may be the most cost-effective short-term abatement solution, but its emissions reduction performance is heavily dependent on managing supply chain emissions while cost effectiveness is governed by the price of solid carbon.

Nuclear routes are highly cost-effective mitigation options, but could suffer from regionally varied perceptions of safety and concerns regarding proliferation and the available data lacks depth and transparency.

They note that better-performing fossil-based hydrogen production technologies with lower decarbonization fractions will be required to minimize the total cost of decarbonization but may not be commensurate with ambitious climate targets.

For the study, they parameterized and re-estimated production costs and life cycle emissions from currently available assessments to produce robust ranges to describe uncertainties for each technology.

Look at where electrolysis is clustered:  way up in the top right corner.  Effective, but very expensive.

Since we need to get to 90% or better, only technologies above the 90% line should be considered.  Of those, sulfur-iodine is the cheapest.

Per Infogalactic, the sulfur-iodine cycle requires temperatures upwards of 830°C to crack H2SO4 into H2, SO2 and H2O.  This is within reach of nuclear heat supplies, and indeed the article states that the S-I cycle was tested with heat from Japan's High Temperature Reactor.

So there's your answer to "nuclear wants to run all the time":  you size your nuclear heat supply for the tops of your regular electric demand peaks, and when you don't need that much output you dump part of the heat into sulfur-iodine hydrogen production.  If you want to add "renewables" and can store hydrogen or convert it to storable products, you can use them to increase the capacity factor of the S-I plant.

Wind, Nuclear and Hydro electrolysis are the cleanest methods but are still too costly.

Higher efficiency electrolysers with a mix of (1) mass produced smaller lower cost NPPs and/or (2) higher + larger + more efficient wind turbines and/or (3) off peak excess lower cost Hydro are strong possibilities in the not too distant future.

The efficiency and cost of solar will have to be improved to compete. It can be done by 2030/2040 if the current tendency is maintained.

The recently disasted/burnt large areas of California, with the help of 50,000+ Central America emigrants and appropriate tools/machinery, could be cleaned and rebuilt as a show case of carbon mitigation, adapted agriculture/forest and housing, and the dawn of clean hydrogen technology.

A few thousand goats could be used to keep brushes from growing under new trees.

An interesting study that confirms pretty much what is suspected; brown hydrogen, created from fossil fuel feed stocks, is low cost and emissions dirty while emissions clean green hydrogen is too expensive.
But, the questions are still out there: Do we need hydrogen? and more specifically, do we need hydrogen to power cars? I think the answer to the first is 'Yes;' other than for chemicals, we need it to power those devices with unique requirements that grossly pollute the Planet like aircraft and ships. The answer to the second is 'No.'

Indeed, Lad.  2/3 of light-duty vehicle fuel consumption is easily replaced by PHEVs using grid power and relatively small batteries.  The other 1/3 can be swept up with bio-derived fuels, though not "biofuels" as currently conceived.  Out-of-the-box approaches are required to build that bridge all the way over.

Oh Harvey,
It sounds like you might be a university graduate because you know nothing about hard labor and rakes.
50,000 immigrants between the 1,7 million acres that burned so far in California is 33.3 acres each. That's a lot of rakes between them.
Goats under young trees - now I know you'r having a lend.
The answer would be closer to education resourcing and implementing strategies that can help prevent these events in the face of increasing risk.
An obvious low tech method is to physically remove fuel build up and research into species selection that show reduced fuel build up .
I'm not aware of comparative scientific studies of the fire risk of various species and forestry practices.
It would be a good place to start.

Hydrogen is the gift that keeps on giving for Greenwashing

The same applies to goats, use as many thousand as required to stop brushes from growing and feeding fires.

Slow growing grass and bushes, where goats cannot keep up, is another solution.