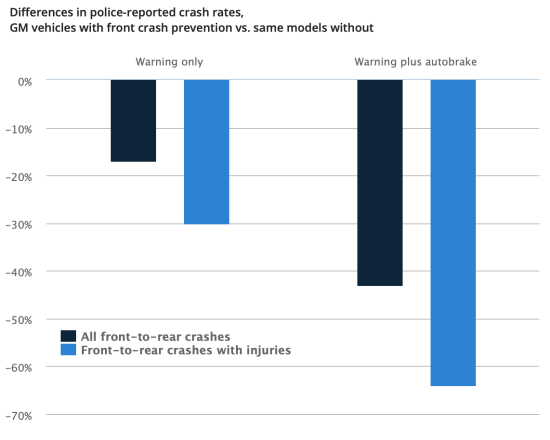 The results echo an earlier IIHS study involving Acura, Fiat Chrysler, Honda, Mercedes-Benz, Subaru and Volvo vehicles, which found that the combination of forward collision warning and autobrake reduced front-to-rear crash rates by 50% for crashes of all severities and 56% for front-to-rear crashes with injuries. Forward collision warning without autobrake cut the rates 27% and 20%, respectively, for vehicles in that study.

The evidence has been mounting that front crash prevention works, and it works even better when it doesn’t solely rely on a response from the driver.

—Jessica Cicchino, IIHS vice president for research and author of both studies

Cicchino obtained information from 23 states on police-reported crashes involving those VINs. The police reports include information on the point of impact, allowing Cicchino to focus on front-to-rear crashes, which are the crashes that front crash prevention technology is designed to help avoid or mitigate. Using exposure data from HLDI, she calculated the rates of these crashes per insured vehicle year.

Information from HLDI’s database was used to control for factors that might have affected crash rates, including the vehicle’s garaging location and driver characteristics.

Cicchino used the information provided by GM on the presence of other crash avoidance features to control for advanced headlight features, which could affect the likelihood of rear-ending another vehicle in the dark.

Twenty automakers representing more than 99% of the US auto market have agreed to make automatic emergency braking standard on virtually all new passenger vehicles by September 2022.