Researchers from Western University, Canadian Light Source, and the Chinese Academy of Sciences have proposed a novel solid-phase Li-S transformation mechanism that enables high energy Li-S batteries in conventional Li-ion carbonate electrolytes. An open-access paper on their work is published in Nature Communications. 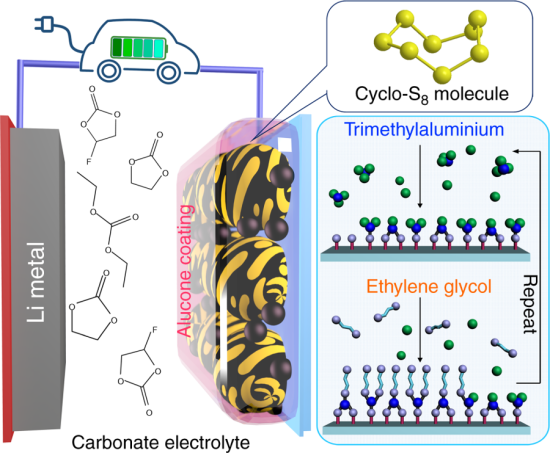 Here, we employ in operando X-ray absorption near edge spectroscopy to shed light on a solid-phase lithium-sulfur reaction mechanism in carbonate electrolyte systems in which sulfur directly transfers to Li2S without the formation of linear polysulfides. Based on this, we demonstrate the cyclability of conventional cyclo-S8-based sulfur cathodes in carbonate-based electrolyte across a wide temperature range, from −20 °C to 55 °C.

This coating material physically separates the direct contact between the electrolyte and the sulfur cathode but still allows Li-ion transmission—resulting in high performance Li-S batteries in carbonate-based electrolyte.

"..exhibit stable capacity over 300 cycles.."
Not a lot of detail there, no SOC nor C rate.

Your SOC data appears to be in Figure 2.

Polysulfides (S8--, S6--, S3°-) solubility will accelerate battery capacity fading during cycling, decrease cycle life and increase self discharge.
I am not optimistic for an electrochemical success for this type of rechargeable cell and of course battery pack with balancing problems.

Lithium sulfur is a challenge. Polysulfides are part of the operation of this cell, so trying to keep them on the cathode is the objective.