More of us work from home, but for those who do not, commuting time has increased

This analysis examines the recent changes in the percentage of people who work at home and changes in time spent commuting to work in the United States and in the 15 largest US cities. The source of the data is the American Community Survey—an ongoing survey by the US Census Bureau. The analysis uses the estimates for 2012 and 2017. The information is for workers 16 years of age and older. The city data apply to the cities listed and not their respective metropolitan areas.

The table below shows the percentages of workers who worked at home, both for the entire country and for the 15 largest cities, with the cities listed in decreasing order of this percentage in 2017. 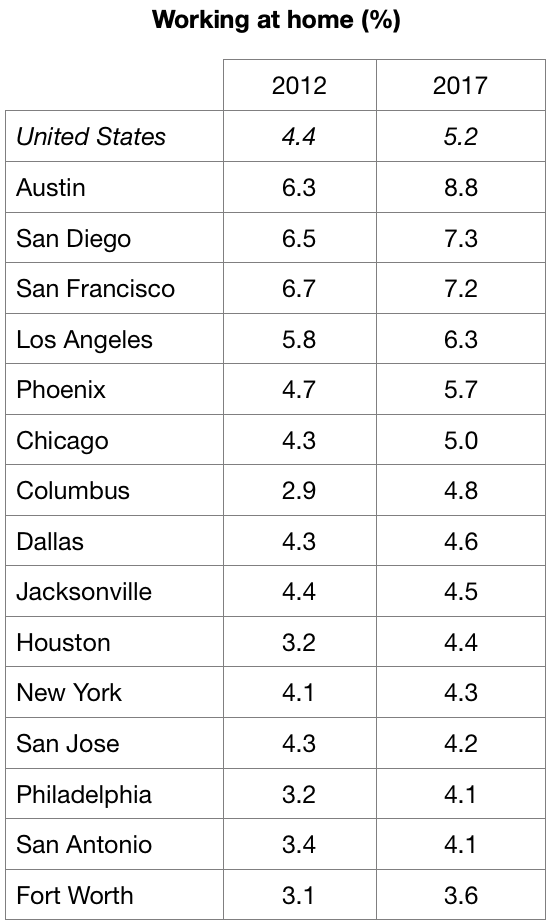 The table below shows the mean one-way travel time to work (by any means) for those who did not work at home, both for the entire country and for the 15 largest cities (with the cities listed in decreasing order of the mean travel time in 2017). 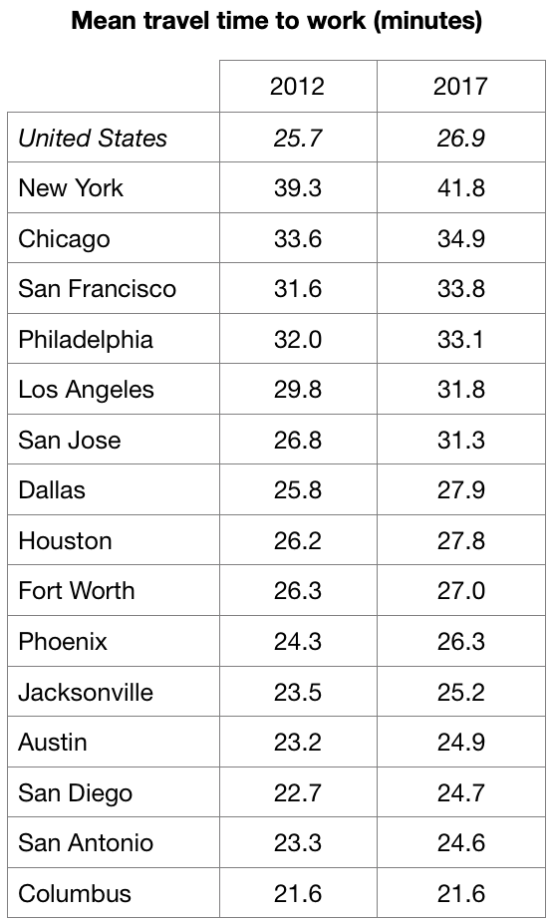 This analysis has documented two seemingly opposing trends. On one hand, the percentage of those who work at home (and thus have travel time of zero) has recently increased, albeit they still represent only a small minority. On the other hand, for those who commute to work, travel time has increased.

Southern California has 91 and 405 freeways where people commute 100 miles round trip for 3 hours per work day. People don't car pool, don't work from home nor do companies put branch offices in the suburbs. If we want sustainable mobility, we need to do better.

"High-speed electric public transports" immediately become travel routes for the criminal class, which they do not even pay to ride.

Putting in such transport is an open invitation to a crime wave.

Japan and SO-Korea have one of the best and fastest commute e-system and one of the lowest crime rate and so has Germany, China and many other countries.

High crime rates in USA started decades/centuries ago during the cowboy days followed by declining/lack of civilities, current local and imported gangs and many more deranged local people with guns in their hands.

Japan and South Korea are mono-racial societies.  That's why they can have nice trains, and (save for a few things like the Acela) we can't.

To deal with people having multiple behavioral problems may require the use of complex automated technologies.

Building more prisons may not be the best solution?

HyperLoops and scooters will be the future of mass transit. Crime is the byproduct of a sick society not a method of transportation.

Blaming the victims, Lad?  I know it's fashionable in many circles but it's still wrong.

Mass transit is part of the "commons" or shared resources.
Americans tend to be independent, we do not play well together.

In 2016, the Acela Express had about 3.5 million passengers and 860 cases of reported Larceny or one case per 4070 passengers. That is an extremely high rate of crime for high speed express trains and is probably many times Japan's and similar Express trains in other countries.

More should/could be done to reduce the crime rate on the Acela Express by 5 to 10+ times. The current high rate of crime is not acceptable.

That would be easy, Harvey.  Simply look for commonalities in the criminals, and restrict or totally ban the group they belong to from Acela (and any other transit where they form the criminal element).

Except the "optics" of that group would be Politically Incorrect to sanction.  You are REQUIRED to worship them.

High speed face and body recognition cameras could be used to separate the neo-cowboys, convicted thieves, illegals and armed criminals from others?

Certain facilities and areas can be legally restricted ?

Of course, screening for security reasons has a cost but it may soon be essential for property and body protection.

We can have a subscription shuttle services, you are checked out as a customer with RFID card, no card, no ride.