Progress on increasing the use of renewable energy and improving energy efficiency is slowing across the European Union, putting at risk the EU’s ability to achieve its energy and emissions reduction targets. Rising energy consumption, particularly in the transport sector, is to blame for the slowdown, according to preliminary data released in the European Environment Agency’s (EEA) annual analysis on the EU’s progress towards its targets on renewables and energy efficiency. 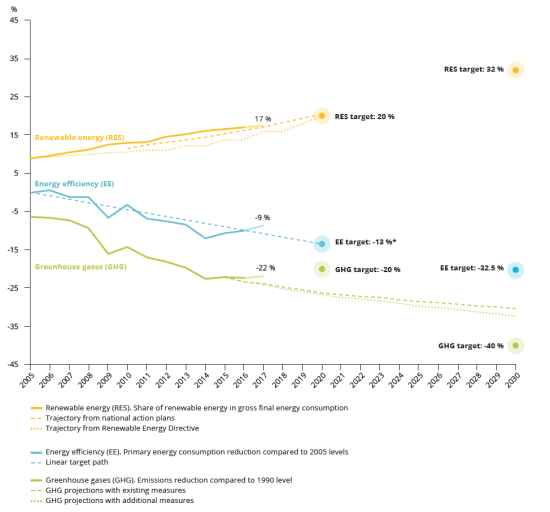 EU progress towards 2020 and 2030 targets on climate and energy

The EEA’s updated assessment on the EU’s progress on renewable energy and energy efficiency targets completes this year’s ‘Trends and Projections in Europe: 2018: Tracking progress towards Europe’s climate and energy targets’ package. The report is based on the most recent reported and approximated data from EU Member States on greenhouse gas emissions, renewable energy uptake and energy consumption. Complementing the report are updated climate and energy country factsheets. The first part of the ‘Trends and Projections’ report, which includes an assessment of progress towards the EU’s climate targets, was published in October.

While the EU as a whole remains on track to meet its 2020 targets to reduce greenhouse gas emissions and increase renewable energy use, recent increasing trends in energy consumption need to be reversed in order to meet the 2020 targets. Renewed efforts will also be necessary to meet the 2030 climate and energy targets.

Progress on renewables. The uptake of renewable energy as part of the EU’s energy mix resulted in a 17.4% share of renewables in gross final energy consumption in 2017, according to preliminary EEA data. This indicates that the EU remains on track to reach its target of a renewables share of 20% by 2020.

However, the pace of increasing renewables use was only up marginally from 17.0% in 2016. There has also been insufficient progress towards the 10% target for renewables in the transport sector by 2020. With 2020 approaching, the trajectories needed to meet the national targets are becoming steeper. Increased energy consumption and persisting market barriers are hindering the uptake of renewables in several Member States.

Notably, in 2016, growing demands for energy in the transport sector reached 33 % of final energy consumption in the EU. The continued growth in energy consumption, particularly in transport but also in other sectors, makes achieving the 2020 target increasingly uncertain.

Preliminary EEA data from 2017 show that 13 Member States are expected to have increased their primary energy consumption to levels above the trajectories to their 2020 targets. That is an increase of three countries from 2016. Member States will need to increase their efforts to bring the EU back on track and reverse the trend of increasing energy consumption, in particular in the transport sector.

Stepped up measures needed to meet 2030 targets. New EU-wide targets are set for 2030 in the areas of greenhouse gas emissions, renewable energy and energy efficiency, namely to:

The EEA’s Trends and Projections report indicates that the current trends will not be adequate to reach the 2030 targets, and additional and enhanced efforts will be necessary in the coming decade.

To this end, Member States will submit by the end of 2018 their first draft national energy and climate plans, including details on climate and energy objectives and policies that that will help them achieve the 2030 targets.