At the Los Angeles Auto Show, Volkswagen is showcasing two electric concepts. The I.D. BUZZ CARGO,in its auto show debut, is an electric panel van concept based on the MEB toolkit that offers up to 340 miles of range on the WLTP cycle. The electric Cargo e-Bike concept, in its North American debut, carries a 463 lb payload.

Both concepts were unveiled at the IAA Commercial Vehicles Show in Germany in September. (Earlier post.) The I.D. BUZZ CARGO shown in Los Angeles has been reimagined from the version first shown in Hannover earlier this year. As a support vehicle for the I.D. R Pikes Peak record holder, its livery mimics the R’s colors and the design includes the course map for the race. 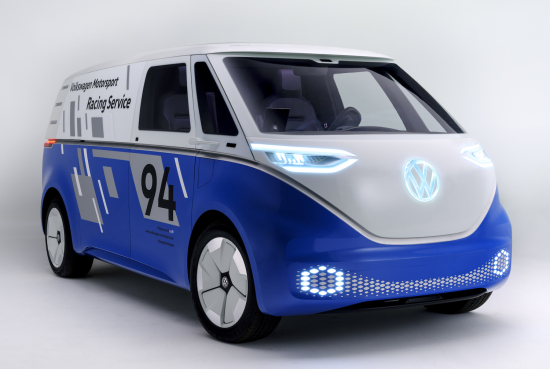 The original Volkswagen Transporter is arguably the most recognizable light commercial vehicle of all time. With the auto show premiere of the I.D. BUZZ CARGO concept, Volkswagen Commercial Vehicles is showing how an electrically powered and completely redeveloped Transporter might change the world of LCVs. Based on the Modular Electric Drive Kit (MEB), and a sibling to the I.D. BUZZ concept first shown in Detroit last year, the CARGO could be launched as a production vehicle in Europe as early as 2022. As the newest member of the I.D. Family, I.D. BUZZ CARGO offers long range driving capability, multiple packaging options and innovative features. Like all I.D. family models, a variety of battery packs can be fitted, according to vehicle usage. Depending on the size of the battery pack, CARGO can achieve ranges between about 200 and 340 miles on the WLTP cycle. If the vehicle covers fairly normal distances in the city on a daily and weekly basis, a lithium-ion battery with an energy capacity of 48 kWh is recommended. If greater range is needed, the energy capacity can be increased up to 111 kWh. 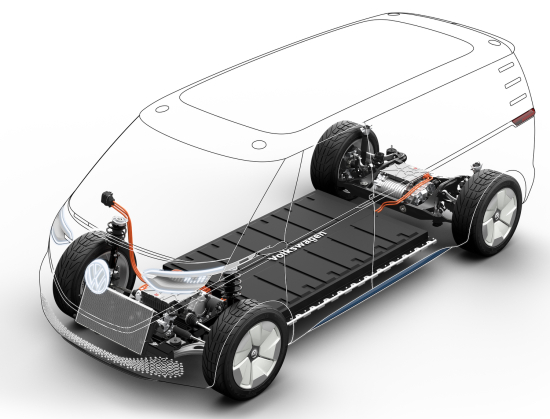 The 111kWh battery in the CARGO can be charged to 80% capacity in 30 minutes with a 150 kW DC fast-charger. The battery system has also been prepared for inductive charging.

The battery is integrated into the vehicle floor, lowering the vehicle’s center of gravity and improving handling significantly. The transporter’s axles have been shifted outwards, because no space is required for a combustion engine at the front, and the compact electric motor is mounted on the rear axle, creating up to 7 cubic feet of extra space in the front of the vehicle.

To charge, the van is positioned over a charging plate while parking. As soon as the control unit of the charging plate in the pavement has set up a communications channel with the vehicle, contactless energy can be transferred through an electromagnetic field generated between two coils (one in the floor of the parking space and one in the vehicle).

Volkswagen Commercial Vehicles has combined the battery in the CARGO with a 201-horsepower (150 kW) electric motor, a single-speed transmission, and rear-wheel drive. However, an all-wheel drive system, such as the one implemented in the I.D. BUZZ, is possible in the future simply by adding a motor at the front of the vehicle.

The vehicle’s top speed is electronically limited to 99 mph.

In driving mode, the main controls are located on the steering wheel and key information is projected in 3D via an Augmented Reality (AR) head-up display. Rear view mirrors become a thing of the past, with cameras projecting images onto small screens in the cab, and other information such as infotainment and climate control functions is displayed on a tablet.

During autonomous driving it is possible to accept, schedule, and process orders from the driver's workplace. Thanks to the connected shelving system's data it is also possible to perform order-related stock checks while on the move. It is also possible to perform optimum, flexible route planning, taking customer appointments into account. With the Safety Check function, any unsecured tools or missing parts are indicated before the start of the journey. Any components taken out get automatically registered, working times recorded and invoices issued. An 8.6-square-foot light integrated in the roof makes access to the items even easier and quicker.

Other innovative features of the CARGO include a solar roof that can extend the range of the vehicle by up to 9.3 miles a day, fully autonomous driving with “I.D. Pilot” model, a digital cargo system and a 230V socket to provide power for workers’ tools.

Cargo e-Bike. The Cargo e-Bike concept is suited for making emissions-free deliveries in places where a truck can’t go—such as pedestrian-only city centers. A 250W motor assists the rider, and is powered by a lithium-ion battery. This vehicle—the smallest Volkswagen commercial vehicle ever—is equipped with two wheels at the front, with the load platform positioned low between them. Mounted on this load platform is a cargo box with a 17.7 ft3 storage volume. 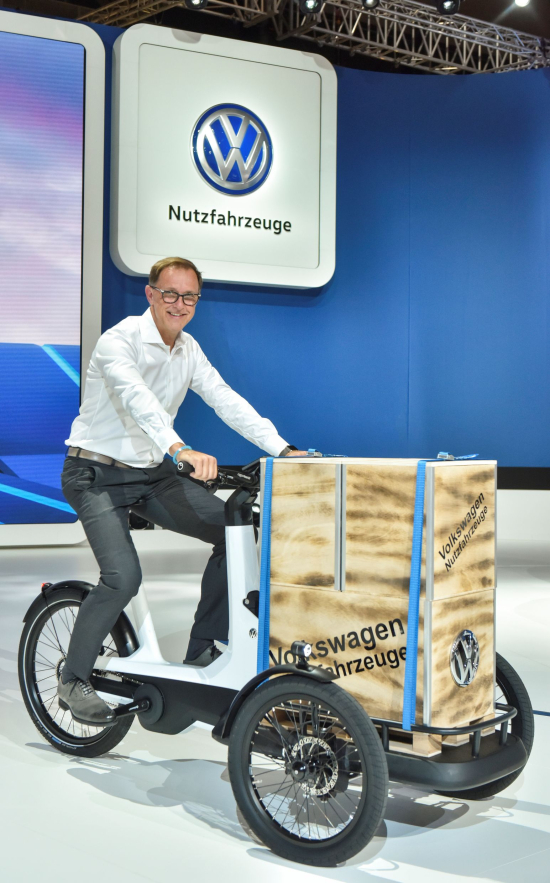 The Cargo e-Bike can carry a total payload of 463 pounds and innovative tilt-compensating tech keeps the load platform horizontal in turns.

Mini-bus, Camper and 8 to 9 passenger SUV versions could multiply the cargo version sales?

They would sell these things as fast as you can fry fritters. Hurry up, VW . we are tired of waiting.