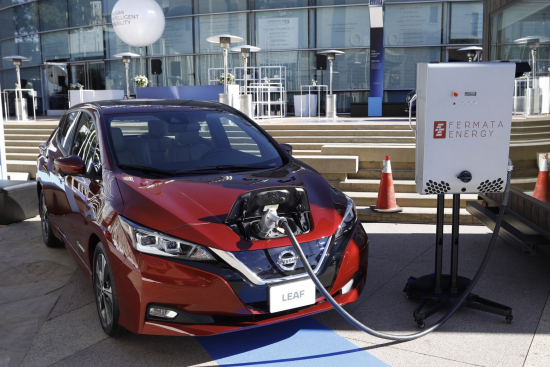 Bi-directional charging technology means not only charging the Nissan LEAF, but also pulling energy stored in the LEAF's battery pack to partially power external electrical loads, such as buildings and homes.

Suited for companies with fleet vehicles, the Nissan Energy Share pilot program will continuously monitor a building’s electrical loads, looking for opportunities to periodically draw on the LEAF’s “lower-cost energy” to provide power to the building during more expensive high-demand periods. This constant monitoring, called demand-charge management, could result in significant electricity savings and could offer the secondary benefit of reducing the burden of peak loads on local utilities.

The Nissan Energy Share pilot program using Nissan LEAFs will serve as a test of both technology and business viability as Nissan and Fermata Energy investigate the outcome for possible commercialization.

Under the global plan, called Nissan Energy, owners of Nissan’s electric vehicles will be able to easily connect their cars with energy systems to charge their batteries, power homes and businesses or feed energy back to power grids. The company will also develop new ways to reuse electric car batteries.

Nissan has already begun programs in the US, Japan and Europe aimed at creating an ecosystem around its range of electric vehicles, including the Nissan LEAF, the world’s best-selling electric car. Nissan Energy brings these initiatives together as part of the company’s Nissan Intelligent Mobility strategy.

Located in the Nissan Global Headquarters Gallery in Yokohama, the demonstration house features solar panels and a Nissan LEAF electric car that provides power from its battery pack. The Nissan Energy Home allows guests to learn about Nissan Energy, the company’s vision for connecting homes, cars and power grids.

During the day, when the sun is out, the solar panels generate electric power and forward it to the Nissan LEAF battery pack for charging. The LEAF assumes the role of an energy storage unit while the solar energy is harnessed.

When the sun goes down, the home’s electrical demands are managed by the Nissan LEAF to power lighting, air conditioning, televisions and even cooking appliances. The needs of a typical house can be provided using a small percentage of the battery capacity, leaving plenty of range for driving. The next day, the cycle is repeated.

This has to be standardized for all EV makes, and built into home power controls.