Volkswagen testing R33 BlueDiesel; up to 33% renewable content; now in permanent use in Wolfsburg

Volkswagen has been testing the newly developed R33 BlueDiesel fuel blend at its in-house filling station in Wolfsburg since January 2018. The fuel, jointly developed by Volkswagen, the Coburg University and other project partners, contains up to 33% renewable components based exclusively on residual and waste materials and enables CO2 savings of at least 20% compared to conventional diesel thanks to the use of biofuels. 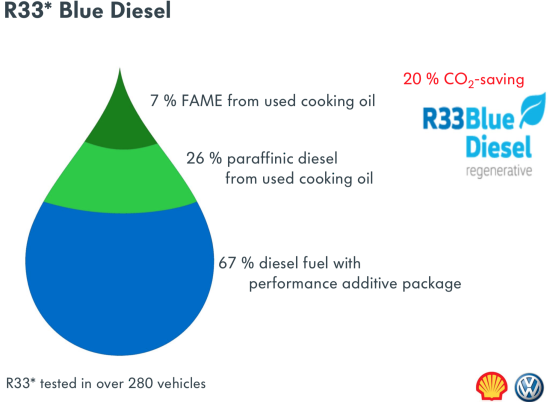 Volkswagen employees tested the new fuel initially. Over a period of nine months, they filled up company vehicles with R33 BlueDiesel only.

The current supplier since January 2018 is Shell Global Solutions in cooperation with Tecosol and Neste, who supply fuels certified according to European standards.

R33 BlueDiesel complies with the diesel standard DIN EN 590 and fulfills all criteria for use as a standard fuel without having to meet further requirements. This fuel is of particular interest to Volkswagen’s major and fleet customers whose diesel vehicles cover many kilometers a year as its use helps to achieve climate protection goals.

Following the successful test phase, R33 BlueDiesel is now being used permanently at Volkswagen’s filling stations in Wolfsburg, and a test operation has also been started at the Volkswagen plant in Salzgitter. This summer, it was also introduced at other project partners such as Robert Bosch GmbH. Introduction at further locations is planned. 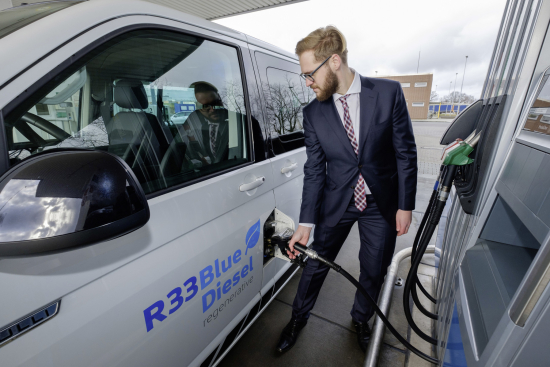 The response to R33 BlueDiesel is very encouraging for Volkswagen and its project partners. R33 BlueDiesel is particularly suitable for companies that rely on diesel vehicles due to their long fuel ranges and still want to achieve their environmental goals. We are preparing for a significant increase in demand for liquid fuels from residual materials and for advanced biofuels in the medium term. I hope that public filling stations will also be offering R33 as “Green Premium” in the near future.

The 7% FAME content suggests to me that it's highly valuable for its lubricity properties despite its high cloud point.  This helps keep the pumps and injectors all slippery and working nicely.

Blue Diesel, Blue Coal, Blue NG may produce a bit less pollution and GHGs but they still produce too much.

A short summary about lubricity in clean diesel fuel:
The Swedish environmental class 1 fuel, introduced in the early 90's, had only a few ppm sulfur and basically zero aromatics. Its properties regarded unregulated emissions was excellent, but that is another story... A problem encountered early on was excessive wear of pumps. First, it was thought to be due to lack of sulfur but the real cause was that the deep hydrogenation (to remove aromatics and sulfur) removed polar compounds that acted as lubricants. The problem was solved by using an additive. In 2000, incompatibility (e.g. fuel filter clogging) with the additive used by PSA for the first generation of DPFs was encountered. This was solved by reformulating the lubrication additive. It was also found that when FAME was introduced for low-level blending, no lubrication additive was needed. I am not sure that I recall the numbers correctly now, but I think ~0,5% FAME was equal to the additive (added at ppm levels) regarding lubricity. Consequently, there is some rationale of keeping a certain level of FAME in diesel fuel and not convert all of it to "clean diesel fuel" by hydrotreatment .

Interesting, but everyone has their own service, I heard a lot of opinions, but some services are fraudsters, I used it many times https://www.essay-company.com/essay-writer, I am very pleased with everything quickly and I recommend qualitatively, a large base of high-quality specialists who perform essays.

Interesting, but everyone has their own service, I heard a lot of opinions, but some services are fraudsters, I used it many times https://www.essay-company.com/essay-writer , I am very pleased with everything quickly and I recommend qualitatively, a large base of high-quality specialists who perform essays.

Genuinely loved this kind of post. Although I want much more information on like precious subject matter. run 3