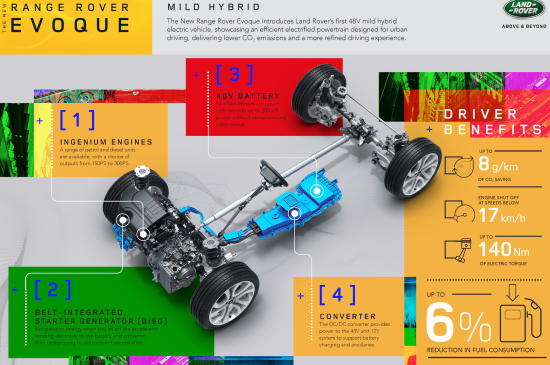 The compact footprint is almost identical to its predecessor’s at 4.37m, yet built on Land Rover’s new Premium Transverse Architecture, there is more interior space than before. A longer wheelbase yields 20mm extra rear kneeroom and an increase in small item stowage—the larger glove box and centre cubby can now fit tablets, handbags and bottles with ease.

The luggage space is 10% larger (591 liters) as well as much wider and easily fits a folded stroller or set of golf clubs, with space increasing to 1,383 liters when the flexible 40:20:40 second-row seats are folded.

The new architecture has been developed for electrification, with a 48-volt mild-hybrid available at launch and a plug-in hybrid model offered around 12 months afterwards.

The mild hybrid powertrain is a first for Land Rover and works by harvesting energy normally lost during deceleration thanks to the engine-mounted belt-integrated starter generator, storing it in the under-floor battery. At speeds below 17km/h (11mph), the engine will shut off while the driver applies the brakes. When pulling away, the stored energy is redeployed to assist the engine under acceleration and reduce fuel consumption. The result is a refined, quiet and efficient drive in built-up traffic heavy areas, in addition to efficiency savings. 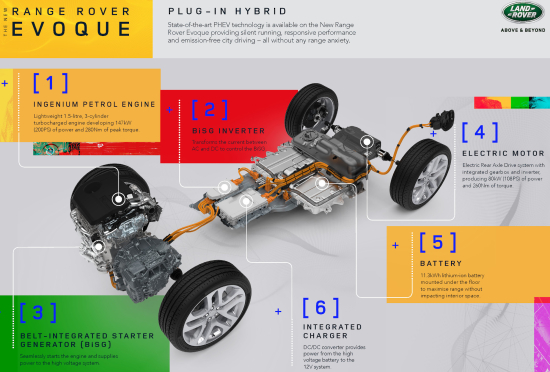 The most popular all-wheel drive, automatic transmission vehicles, come with a choice of four-cylinder Ingenium gasoline and diesel engines. This is where the 48-volt mild-hybrid system is used to reduce CO2 emissions to as lows as 149g/km and fuel economy from 42 mpg US (5.6l/100km) (based on NEDC Equivalent test procedure). 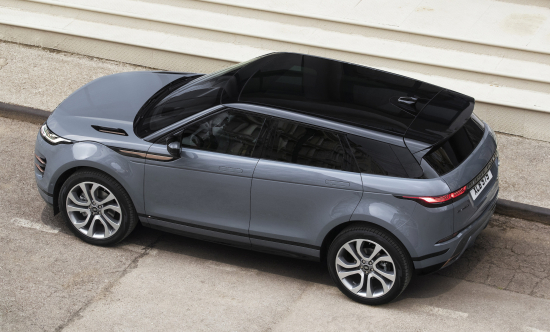 The compact SUV combines all-terrain capability with all-weather assurance. New Evoque features All-Wheel Drive, as well as a second-generation Active Driveline with Driveline Disconnect to enhance efficiency and Adaptive Dynamics to deliver the optimum balance of comfort and agility.

Terrain Response 2—technology first found on full-size Range Rover—automatically detects the surface being driven on a adjusts the set-up accordingly, while Evoque can now wade through water up to 600mm (previously 500mm).

The original Range Rover Evoque made its debut in 2010.

Boy, that's a lot of complication and run away engineering effort that can be replaced with a rather simple EV driveline. No wonder the car companies are gouging their buyers by selling repair policies. An ICE with port and direct injection, turbo, variable timing cam. an expensive 48 volt battery, multi speed transmission, etc...in truth a whole lot of unneeded mechanical crap.

Well Lad, this "simple" EV crap is much more expensive.

A "simple" BEV with thousands of battery cells and thousands of Battery Management System (BMS) components and battery and motor cooling system...isn't so simple after all...it's just an illusion. Have you ever taken apart a Tesla's battery pack before? Very complicated inside with thousands of parts and interconnection.