Ryohin Keikaku Co., Ltd. has supplied the design for an autonomous shuttle bus in Finland with the aim of rolling out this public transportation in 2020. The Gacha Shuttle Bus is the first autonomous bus designed for all weather conditions. Finland-based Sensible 4 is providing the autonomous driving technology with the support of three Finnish cities (Espoo, Vantaa, Hämeenlinna). 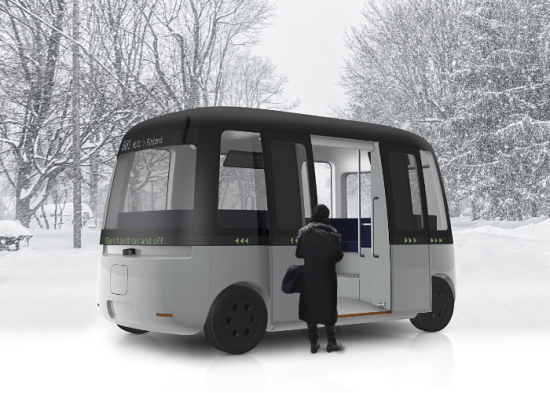 Weather plays a critical role in opening the market for autonomous buses or robotaxis. Currently heavy rain, fog, and snow prevent autonomous vehicles from driving, as the existing technologies are mostly being tested and developed in warm climate conditions. Sensible 4 has focused on technology tests and validation under arctic Lapland conditions.

The highlights of the design are its shape, which is friendly and designed with no front or back, the LED light belt, which is made from the combination of the headlights and communication screen, and the seating that follows the soft rounded square shape of the bus. Finland has a perfect environment for the autonomous vehicle testing, because it is legally not required to have a driver on the vehicle running on public roads, the company noted.

The prototype will be unveiled to the public in Helsinki, March 2019. After the unveiling, the Gacha shuttle bus will start its final phase of testing, operating a passenger service in three Finnish cities.

The Gacha Autonomous Shuttle Bus has 10 seats, with room for 6 standing. The 4WD electric powertrain supports a maximum speed of 40 km/h and a range of 100+ km. Fast charging is standard, wireless charging will be optional.