Researchers with the Department of Energy’s Oak Ridge National Laboratory have demonstrated a new level of control over photons encoded with quantum information. Their research was published in an open-access paper in the journal Optica.

Quantum scientists working with frequency-encoded qubits have been able to perform a single operation on two qubits in parallel, but that falls short for quantum computing.

To realize universal quantum computing, you need to be able to do different operations on different qubits at the same time, and that’s what we’ve done here.

According to Lougovski, the team’s experimental system—two entangled photons contained in a single strand of fiber-optic cable—is the “smallest quantum computer you can imagine. This paper marks the first demonstration of our frequency-based approach to universal quantum computing.”

A lot of researchers are talking about quantum information processing with photons, and even using frequency. But no one had thought about sending multiple photons through the same fiber-optic strand, in the same space, and operating on them differently.

The team’s quantum frequency processor allowed them to manipulate the frequency of photons to bring about superposition, a state that enables quantum operations and computing. 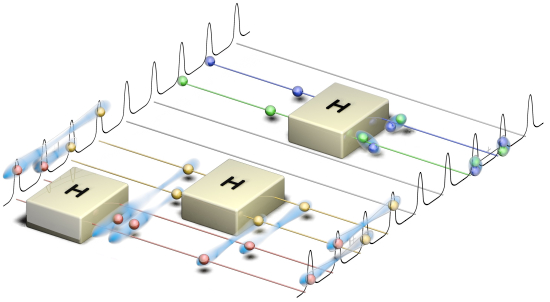 Unlike data bits encoded for classical computing, superposed qubits encoded in a photon’s frequency have a value of 0 and 1, rather than 0 or 1. This capability allows quantum computers to concurrently perform operations on larger datasets than today’s supercomputers.

visibility—a measure of how alike two photons are—compared with the 70% visibility rate returned in similar research. Their result indicated that the photons’ quantum states were virtually identical.

The researchers also applied a statistical method associated with machine learning to prove that the operations were done with very high fidelity and in a completely controlled fashion.

We were able to extract more information about the quantum state of our experimental system using Bayesian inference than if we had used more common statistical methods. This work represents the first time our team’s process has returned an actual quantum outcome.

Williams pointed out that their experimental setup provides stability and control. Stability and control enable quantum operations that preserve information, reduce information processing time, and improve energy efficiency. The researchers compared their ongoing projects, begun in 2016, to building blocks that will link together to make large-scale quantum computing possible.

Lukens said the team’s results show that “we can control qubits’ quantum states, change their correlations, and modify them using standard telecommunications technology in ways that are applicable to advancing quantum computing.”

Once the building blocks of quantum computers are all in place, he added, “we can start connecting quantum devices to build the quantum internet, which is the next, exciting step.”

Much the way that information is processed differently from supercomputer to supercomputer, reflecting different developers and workflow priorities, quantum devices will function using different frequencies. This will make it challenging to connect them so they can work together the way today’s computers interact on the internet.

The research is supported by ORNL’s Laboratory Directed Research and Development program.